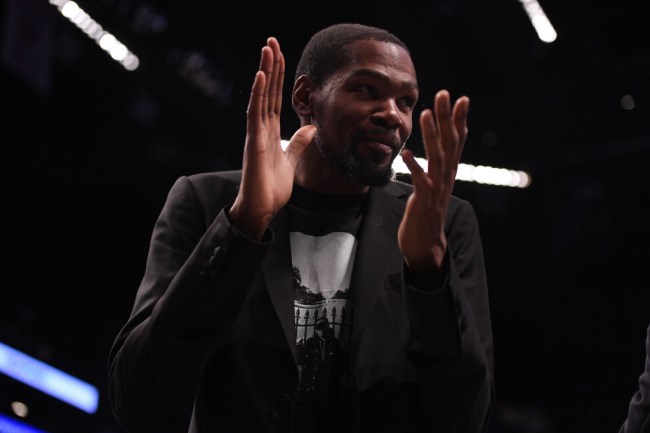 After rupturing his Achilles during Game 5 against Toronto last season, Kevin Durant hasn’t played a game in the NBA. It’s been 240 days, and counting, since we’ve seen KD take the floor.

While the rehab process for pretty much any injury differs from player to player, one thing is certain when it comes to rehabbing a ruptured Achilles and that is that it takes time.

With it being a long process, it’s the type of recovery where there really isn’t going to be groundbreaking updates, say, week-to-week. However, on Tuesday, Kristian Winfield of New York Daily News shared a video of Durant running sprints at Brooklyn’s practice facility as well as having a little of fun showing off his (not so great) arm throwing a football.

Durant, who ruptured his Achilles tendon in Game 5 of the 2019 NBA Finals, has progressed to sprinting, according to NY Daily News. He was running with a football in an empty gym at the HSS Practice Facility in Industry City on Tuesday, then showed off his not-so laser arm throwing the ball across the court.

The progress has been significant for Durant, who could not put weight on his leg at the time of the injury. He has progressed from shooting flat-footed jump shots, to turn-around fading jumpers, to now sprinting at what appeared to be around 75-80% of his top speed.

“He’s been doing this,” Nets head coach Kenny Atkinson said after practice on Tuesday. “It’s been part of his rehab.”

Durant is still expected to miss the entire season, but it’s nice to see him back on a basketball court even if it is just him running across the floor and tossing a football around.

He signed a four-year, $164 million contract with the Nets this past summer. While Brooklyn fans may be frustrated with Durant not being able to play yet, on top of Kyrie Irving battling injuries, waiting to see these two take the court healthy at some point will likely be worth every bit of the wait.