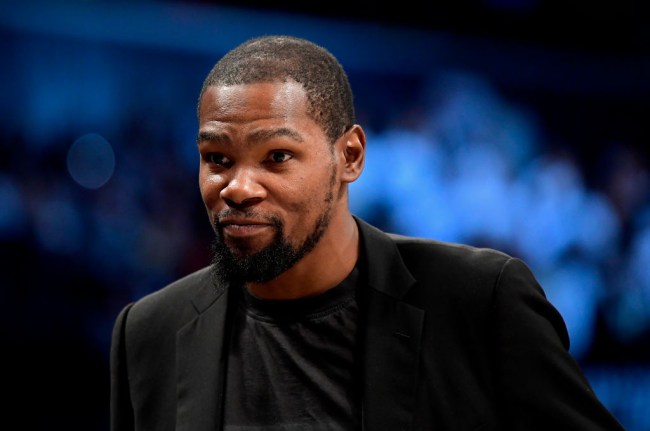 Since the big cancel robbed us of having March Madness this year, CBS has been re-airing classic NCAA Tournament games on the weekends. On Saturday night the network re-aired the 2003 national title game between Syracuse and Kansas and during the broadcast Orange head coach Jim Boeheim simultaneously watched and commented on the game in a Facebook Live session.

On top of breaking down the game, Boeheim revealed a rather intriguing scenario saying that if then-assistant coach Troy Wever didn’t elect to leave the program in 2004 then Kevin Durant would have signed with Syracuse.

Great nugget from this Facebook live on the @Cuse_MBB title game from 2003. Jim Boeheim claims if former assistant Troy Weaver didn't leave for the NBA, Syracuse would have landed Kevin Durant. An intriguing what if.

Syracuse went on to win the national title game thanks to Carmelo Anthony, Hakim Warrick, and Gary McNamara, but to think of the ‘what if’ scenario of Durant coming to Syracuse just a few seasons later is something. The Orange could very well have had another Carmelo-like season.

Weaver was an assistant under Boeheim until 2004 when he elected to take a player personnel job with the Utah Jazz. Durant then, of course, went on to play one season at Texas (2006-07) where he averaged nearly 26 points per game en route to being named Naismith Collegiate Player of The Year.

Durant’s Longhorns got bounced in the second round of the NCAA Tournament that season. Syracuse, on the other hand, wasn’t even an NCAA Tournament team during Durant’s one season in college, but that likely would have changed if he elected to sign with the Orange.