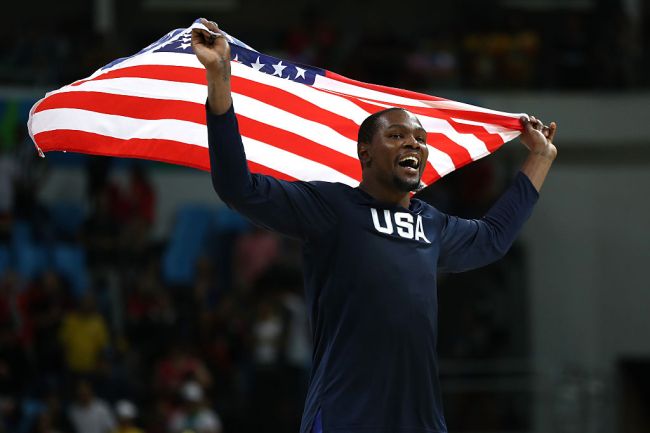 The phrase “woke up and chose violence” is teetering on “savage” levels of overuse, but leave it to Very Online Guy Kevin Durant to leave me no choice. Color me shocked.

Durant, who America is counting on to secure Gold in Tokyo, woke up Wednesday morning and mocked the socioeconomic stature of his trolls.

In a now deleted tweet, a Twitter user who is too cowardly to stand by his barbs, wrote: “Kyrie needs a better team around him.”

Durant rolled over at 6 am Toyko time, the morning after ravaging Iran 120-66, and delivered a retort:

Floor to ceiling windows. Plush carpet. Chic minimalist vibe. Trying to figure out how this is a burn, but I don’t make the rules.

best part of this tweet is that its 6AM in Tokyo right now 😭😭 pic.twitter.com/l1oqeQEoIH

a friendly reminder that KD has more career tweets than points pic.twitter.com/3dxsO8RqEs

LMFAOOOOOO dawg u aint have to do him like that 😭 pic.twitter.com/5QAC6izAwg

KD you need a better team around you pic.twitter.com/4dDRxqxckh

“Kyrie needs a better team around him” pic.twitter.com/FgAYRqjkyZ

The United States will take on the Czech Republic this Saturday at 8 am, three hours after Durant sends his first Twitter burn to a 15-year-old 3,500 miles away.