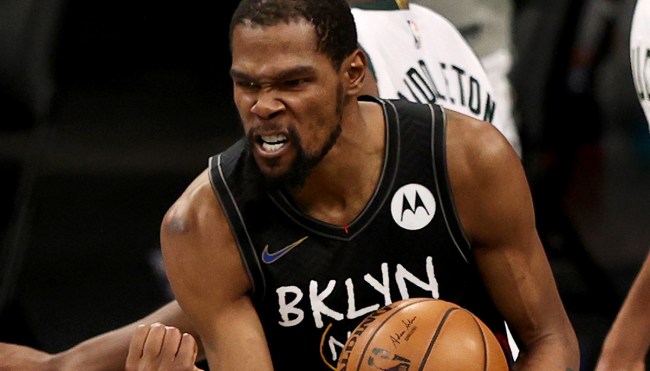 Earlier this month, Anaheim Ducks center Trevor Zegras helped orchestrate one of the filthiest goals in NHL history by lobbing the puck to Sonny Milano from behind the goal before his teammate batted it into the back of the net to cap off the absolutely absurd alley-oop.

You’d be hard-pressed to find many hockey fans who weren’t blown away by the move. However, a few days later, John Tortorella predictably became That Guy by playing the “Will Someone Think Of The Children?” card while voicing his concern that young players may be more concerned with practicing flashy plays like that instead of the fundamentals.

On Monday, Kevin Durant decided to channel his inner Torts when the NBA’s Most Online Player once again fell victim to his inability to log off. On Sunday, Overtime tweeted out a clip of an eighth-grader named Jayden Moore pulling out a fancy move to shake a defender before attempting a shot, and it’s safe to say KD was less than impressed with the deceptive dribble.

It’s pretty clear that Durant was expressing his disdain for what is best described as the “James Hardification” of basketball, and he clarified he was simply voicing his dissatisfaction with the unnecessary (and probably illegal) dribble that didn’t even result in a basket.

With that said, deciding to fire a stray shot at a middle schooler takes far more time and effort than, you know, just not doing that. As someone with an equally crippling Twitter addiction, I understand why Durant may have had trouble exercising some restraint here, but this is the kind of situation where the best thing to say is nothing at all.