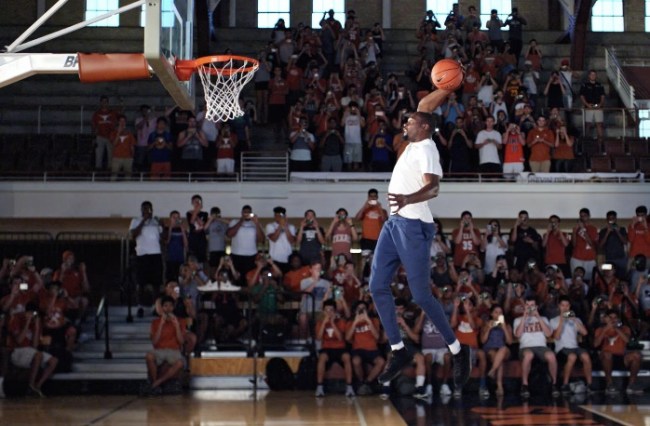 At *least* once a week I find myself typing out ‘everything looks cooler in slow-mo HD’. This is primarily because of The Slow-Mo Guys channel on YouTube. They’ve always been churning out dope videos but they’re really elevated their game lately, especially since they launched ‘The Super Slow Show’ series.

In this clip below, they’ve enlisted the help of NBA All-Star Keven Durant. During a trip to Austin, they were able to sync up with Durant on the University of Texas-Austin campus to film this and they got a bunch of students to help with the clip as well. The students are in the background snapping pics while The Slow Mo Guys have set up the 4K ultra HD camera to film Durant dunking. The final result is a video that makes it look like Kevin Durant’s casually walking on air:

If you haven’t been keeping up with The Slow Mo Guys on YouTube lately then let me fill you in on some highlights. They recently filmed this clip which shows the speeds at which bullets travel from four popular high-powered guns. Seeing how much faster the Barrett .416 is compared to the 9MM is pretty damn wild. And this clip which shows how the pixels in your TV work was pretty awesome as well.