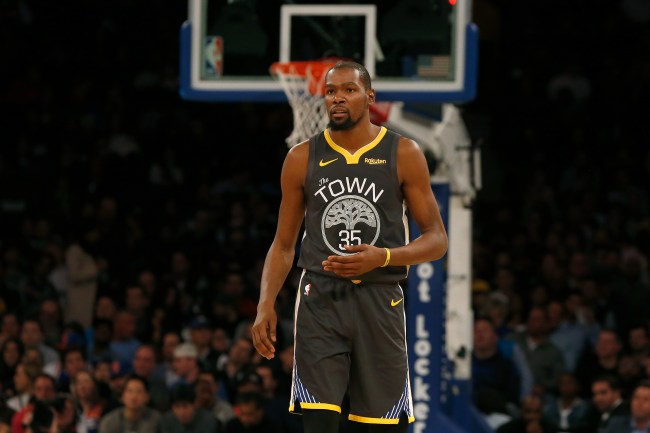 Kevin Durant’s free agency decision led him to the Brooklyn Nets, where he’ll be teaming up with Kyrie Irving and DeAndre Jordan to form an impressive superteam that has the potential to win a couple championships. Of course, everything might be on pause this first season together, though, considering Durant will be rehabbing a torn Achilles that he suffered during the NBA Finals, but the fact that the Nets have, arguably, the best player in the world on their roster brings plenty of hope.

One team that famously missed out on Kevin Durant? The New York Knicks, who had been linked to both Durant and Irving all season long, but failed to deliver a superstar (again) to their frustrated fanbase. The Knicks haven’t been relevant for nearly two decades now, and whether it be poor ownership, dysfunction in the front office, overall poor play, failed expectations or something else, the “mecca of basketball” just isn’t getting the game’s best players.

While Kevin Durant would have easily been the biggest free agent to ever sign with the Knicks, a close buddy of his — ESPN’s Jay Williams, who’s also a partner on their ESPN show, The Boardroom — offered some insight as to why Durant spurned the Knicks during an appearance on Zach Lowe’s podcast. Take a look below, because it actually makes plenty of sense.

“Who gave Porzingis the nickname, the Unicorn? (Durant did),” Williams said on a podcast with ESPN’s Zach Lowe. “Do you not think that was one of the attractive pieces he saw? Like, ‘Wow. Wow, together, this is what it can be together. Together, potentially.’”

Durant raved about Porzingis in January, just three weeks before the Knicks dealt him to the Mavericks for two first-round picks and cap space.

“Seeing a guy that’s 7-foot-3 being able to shoot so effortlessly — usually guys take a while to get their jump shot off from the 3-point line,” Durant said. “He has a quick trigger from deep. That’s rare to see at that height.”

So, yeah, way to go Knicks. In order to free up all that salary cap space that the team had hoped to use to persuade Kevin Durant and possible Irving to join the team, they dealt a franchise cornerstone who a former MVP raved about. Does that seem smart? Not really.

The Knicks never even got a free agent meeting with Kevin Durant, and the reason why may have actually been mutual. Whether or not Durant ever wanted to play for the Knicks we may never know, but the team’s owner, James Dolan, made it seem as if the franchise didn’t want him anyway, with reports surfacing that he wouldn’t offer Durant a max contract after looking at the medical report following his Achilles surgery. In Williams’ mind, that may have rubbed the two-time NBA Finals MVP the wrong way.

“If I’m Kevin Durant, I’m sitting back and saying, ‘Oh, so if I wanted to go to New York, you guys weren’t going to take me?’” Williams said. “I think players see stuff like that. Players talk all the time.”

Who knows if Williams’ take has any validity to it or not, but the fact that he’s close to Kevin Durant, an ESPN analyst and is a former player himself, it seems like he probably knows what he’s talking about. Plus, even the most casual fan knows that the Knicks trading away a young star like Porzingis was only going to hurt the sales pitch for a superstar to join the team, not help it, so this all makes a lot of sense.