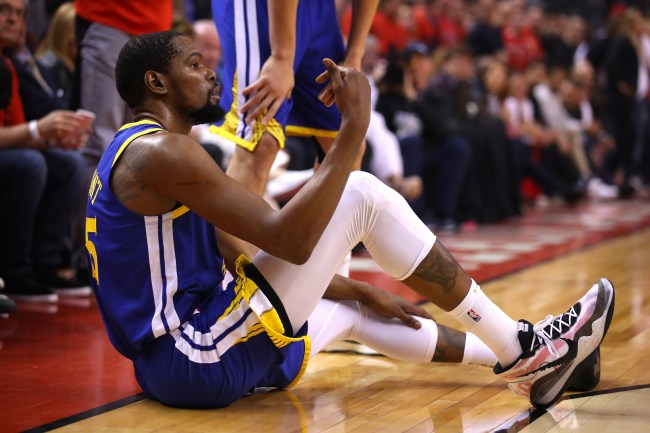 Kevin Durant may be down and out right now after his latest (and severe) injury suffered in Game 5 of the NBA Finals the other night, but his long-term future may not be as bad as his short-term one. The two-time Finals MVP, who’s set to become one of the top-class free agents in the NBA this summer, who injured his Achilles, has a long road ahead in recovery, presumably missing most, if not all, of next season, which, presumably, could put a serious damper on the teams who might be interested in signing him this summer, right? Well… not so fast.

According to Bobby Marks of ESPN, the resident Front Office Insider for the network, has heard that at least three unknown teams told him that they’d still give Kevin Durant a max contract this summer despite the severe injury. Considering Durant’s Warriors teammate, DeMarcus Cousins, endured the same injury last season and was forced to take a one-year deal to prove himself, Marks’ report is pretty incredible, and speaks to the ability of Durant.

Appearing on Get Up the other day, here’s what Marks had to report, per Yahoo! Sports:

“I talked to three teams and I didn’t even get the question out. I said ‘If you had cap space would you go out and sign Kevin Durant knowing that he will likely be out maybe the whole year?’ The resounding answer was ‘Yes.’”

Bobby Marks’ report about Kevin Durant’s free agency comes on the same day that a separate story said the Warriors were hoping to pitch the superstar on a unique contract extension this summer prior to the injury, hoping the team could convince him to stay long-term. Who knows if that changes now?

Kevin Durant’s injury may have changed the entire landscape of the NBA, given his polarizing impact on this year’s free agent class. Just take a listen at what ESPN’s Brian Windhorst had to say about that following Game 5 of the NBA Finals the other night.

The NBA offseason was already going to be nuts, with rumored trades of superstars, All-Stars teaming up and a long list of players like Kevin Durant, Kyrie Irving, Kawhi Leonard and Klay Thompson, among others, who could change the fortunes of an entire organization by adding just one of them. Throw in the drama (and uncertainty) of Durant’s injury and, well, strap on your seatbelt, because the domino effect is going to make for an interesting ride.