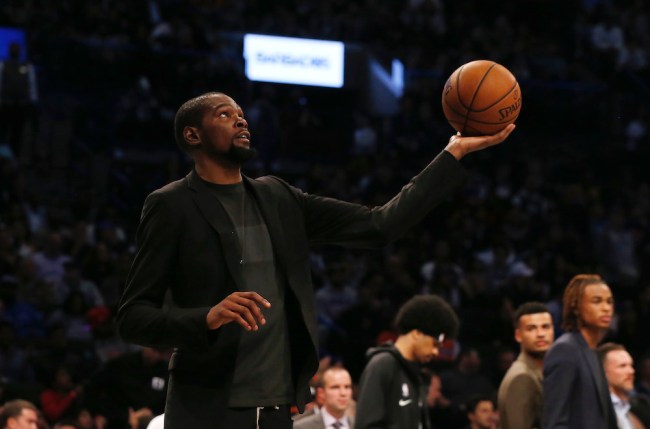 When Kevin Durant was a free agent during the 2019 NBA offseason, there were plenty of rumors swirling about where the future Hall of Famer would land. Many had a feeling Durant would end up in the New York area — as speculation grew over the years about the New York Knicks making a run at him — but, ultimately, the two-time champion decided to team up with Kyrie Irving on the Brooklyn Nets.

While video surfaced of Durant and Irving talking in a hallway during the 2019 All-Star Game garnered a lot of interest, the two players allegedly got the idea of joining the Nets going over vegan burgers and kale salad. Seriously! Now that each is fully healthy, Brooklyn is just one win away from the Eastern Conference Finals.

But even after Kevin Durant had made his decision to join Brooklyn, his dad, Wayne Pratt, was still shopping his son to one other team: Those New York Knicks.

According to a new book by author Matt Sullivan entitled “Can’t Knock the Hustle”, Pratt texted KD to reveal a secret video conference he had with Knicks executives Steve Mills and Scott Perry. Understandably, Durant was not happy with the news.

Per the New York Daily News:

Durant was upset about the meddling, which was also a tampering violation by the Knicks, and “didn’t want his pops f–king with the plan,” the book stated.

Still, Pratt, a Knicks fan and “occasionally estranged” from his superstar son, pushed for Durant to change his mind about the Nets.

“The Knicks is Mecca,” Pratt texted, according to “Can’t Knock the Hustle.” “If you want to do it, do it big. If you want to be a New Yorker, be a Knick.”

Despite the last ditch Hail Mary from his dad, Kevin Durant ended up sticking with his gut and joining his buddy Irving on the Nets. And while the Knicks’ meeting with Wayne Pratt was technically a form of tampering, the league didn’t necessarily crack down with punishment.

As for all the rumors about Durant to the Knicks during that 2019 NBA offseason, the star shot down those in a big way during an interview in 2020. Here’s what the star said during an appearance on JJ Redick’s The Old Man and the Three podcast.

“Around February (of 2019) I was thinking, ‘I didn’t want to be the savior of the Knicks or New York.’ I didn’t care about being the King of New York. That never really moved me,” Durant said. “I didn’t care about being on Broadway. I just want to play ball and go to the crib and chill. So I felt like that’s what Brooklyn embodied. And I wanted to live in New York. And I felt like Brooklyn is everything I’m about — chill, on the low, all-black everything, we’re quiet. Just focus on basketball. There’s no show when you come to our games. No Madison Square, no Mecca. All of that sh–. We’re just going to hoop and build something new in Brooklyn.”

In some cases, pops knows best. However, in this situation, Kevin Durant wanted nothing to do with his dad’s suggestion of playing for the New York Knicks. As of today, it seems like the former league MVP has made the right call.