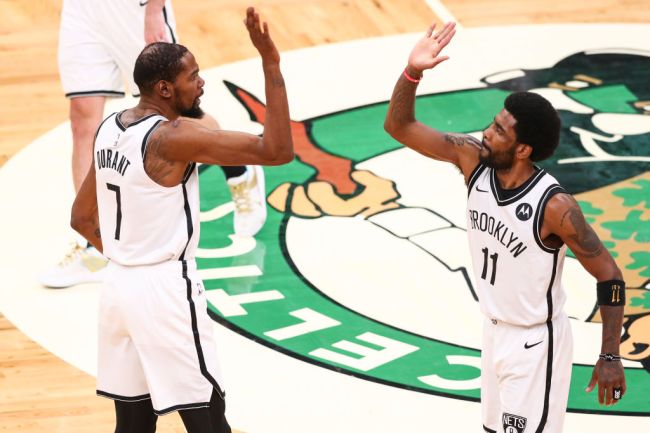 Up until now, most NBA fans were convinced that Kyrie Irving and Kevin Durant started cooking up their plan to join forces during the 2019 All-Star Game. We all remember the video of the two talking in the hallway, and Durant even admitted back in September of 2020 that in that moment was when they “solidified” that they were going to go somewhere together.

However, new details are coming out courtesy of Matt Sullivan’s new Nets book “Can’t Knock The Hustle” that Durant and Irving actually started to discuss teaming up together well before the All-Star Game.

About a month before the All-Star Game, Durant reportedly met Irving at his Massachusetts home when the Warriors were in town to take on the Celtics. Irving wanted to find a way out of Boston to return home and play for Brooklyn while Durant saw Golden State as a team that would always look at Steph Curry as the face of the franchise. Therefore, it made sense for them to join forces and create their own superteam.

Durant was so invested he even ate a vegan burger and the two shared a vegan smoothie. Irving is reportedly a vegan and an investor in Beyond Meat.

KD would follow Kyrie’s lead. That night in the suburbs, he even ate a vegan burger for the first time. “I could f— with this,” he said, according to FOX Sports. A super-team was starting to be formed, over a side of kale salad and… clink

KD and Kyrie went upstairs to the playroom, shared a vegan smoothie, shot a Nerf ball into a toy hoop and played NBA2K. Controlling miniature versions of themselves and their teammates, like marionettes, they wondered how else they could string together a team that was going somewhere. “And from that point,” Kyrie said, “we took the power back and put it in our hands.”

Fast-forward to now and the Nets are just one win away from the Eastern Conference Finals.