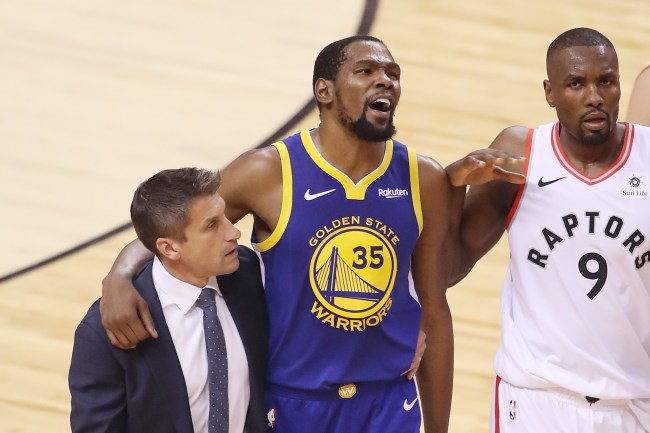 The average recovery time for a ruptured achilles is nine months. Kobe Bryant returned after eight months in 2013, but was plagued with injuries and in three years, he called it quits. Kobe was 34 when he retired, four years older than Durant, but history indicates that an achilles injury is a curse on a player’s career.

Notable NBA players like Elgin Baylor, Patrick Ewing, Wesley Matthews, Dominique Wilkins have experienced decreased productivity in their respective post-achilles injury careers. Not one saw a bump in points, rebounds, or assists after suffering one of the more feared injuries in NBA play.

It’s too early to know how the injury will affect one of the league’s best, and new reports indicate that we’ll have to wait a very long time for proof.

Durant’s free agency has been complicated by a ruptured right Achilles tendon that will keep him out of the entire 2019-20 season.

Durant finished the playoffs as the only player in NBA history to average 30 PPG on 50-40-90 shooting in a single postseason. It’s a shame this is how his season ended…

Most NBA fans despised Durant for having his cake and eating it too by joining the Warriors. Now, with the biggest challenge of his career, Durant is more of an underdog than he’s ever been. I’m not sure there is still one of those fans still rooting against him. The NBA can be a fickle beast.