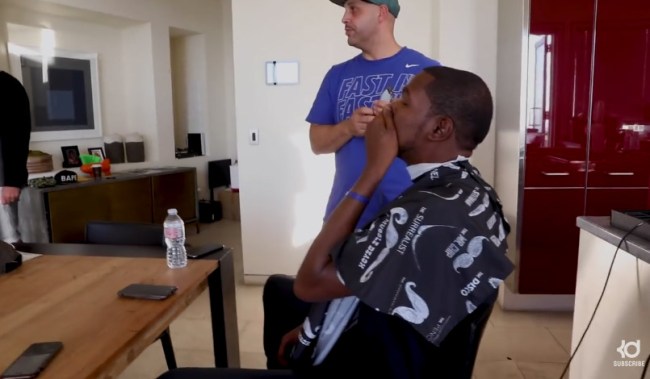 Kevin Durant, as we have well-chronicled for both good and bad, is one of the most active professional athletes when it comes to the internet and social media.

This year, Durant is adding to his already busy YouTube channel by sharing some behind-the-scenes looks and thoughts as he winds his way through another NBA season.

On Tuesday, Durant shared the first video in this series which was supposed to be about taking fans behind-the-scenes of his pre-game routine as he got ready for his first ring ceremony and the Warriors’ opening night celebration.

Unfortunately, as Durant was getting a haircut in preparation for the the night’s festivites he was also watching the Boston Celtics playing the Cleveland Cavaliers when Gordon Hayward suffered his gruesome broken leg. KD’s reaction pretty much mirrored the reaction of the Cavs bench when it happened…total shock.

Later, when driving to the arena for the game, Durant shared his thoughts on Hayward’s injury…

“You know Gordon’s going to bounce back and be, still be Gordon Hayward when he gets back from injury, but it just sucks to see, man. So we’re all praying for him, we all got his back, this is a fraternity and when stuff like that happens we gotta try to rally around each other.”