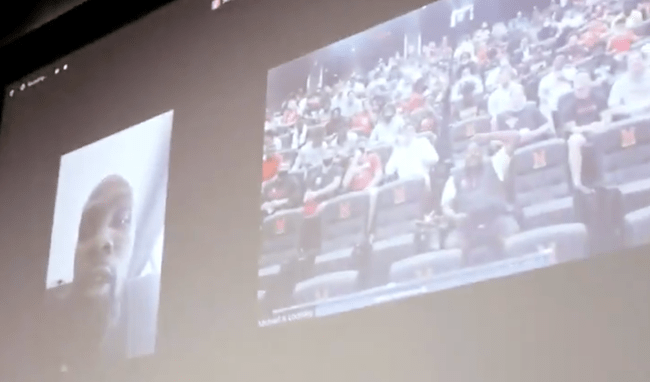 University of Maryland defensive lineman Greg Rose received amazing news on Thursday and it was delivered by  none other than Kevin Durant.

The Terrapins gathered for a team meeting after practice and head coach Mike Locksley had a surprise. He introduced the two-time NBA champion and 11-time All-Star as a guest speaker on Zoom and the team went nuts.

Durant called in to wish the players good luck in the upcoming 2021 season— or so they thought.

After growing up 10 minutes from Maryland’s campus, Durant has long-standing love for the Terps. He provided some words of encouragement and let the team know he will be watching.

And then, before hanging up, he announced that he had a special message for Rose and his teammates knew right away— he was getting a scholarship. When Durant officially made the announcement, the players mobbed him.

Rose transferred to UMD as a walk-on after one season on the community college level. He was overcome with emotion and celebrated with his young child.

Although he has only appeared in two games, Rose impressed coaches with his play during the spring and was named a Scott McBrien Outstanding Non-Scholarship Player Award winner. Now, after Durant’s announcement, the senior is on scholarship for 2021.

Everything about the surprise was well-executed. When Durant’s face popped up on the screen, the team went wild. If he had only wished them luck, that would have been enough.

Durant, however, kept his poker face and broke the news of Rose’s scholarship that sent the team into a frenzy.