Kevin Garnett’s Story About Chopping A Cocky, High School-Aged Austin Rivers Down To Size Is Amazing 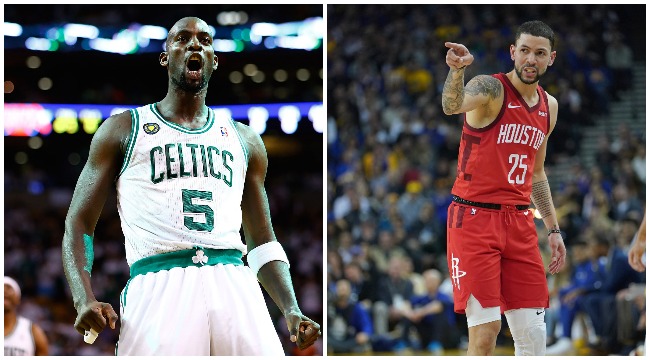 Austin Rivers was the number one player in the country in high school. He was Player of the Year in the ACC as a freshman. He was a lottery pick. And he’s spent the past seven years being a serviceable guard in the NBA. Rivers hasn’t met the astronomical expectations many expected of him, which has helped hone a “I’m not just here because of my dad!” mentality that has pissed a lot of players and fans off.

Last season, Trevor Ariza and Gerald Green attempted to confront Rivers by entering the Clippers locker room, resulting in suspensions. Former Clipper Matt Barnes then called him “arrogant” and Glen “Big Baby” Davis sounded off on him–“You’re a bum who’s been given the world. Shut up and just stay under your father.”

Many believe that during his Clipper days, he acted entitled because his dad was both the coach and the President of Basketball Operations. That entitlement didn’t begin in the NBA, if we’re taking this incredible Kevin Garnett story as gospel.

Kevin Garnett and Tony Allen recently joined the Chris Vernon Show and told a story of a high-school-aged Austin Rivers coming to the Celtics facility and challenging guys to games of 1-on-1. After edging out Paul Pierce and mopping the floor with Kendrick Perkins, Rivers was feeling himself and egged on The Big Ticket.

Take a moment to listen.

You have to be one cocksure high school kid to think that you can gas one of the best big men of all-time. When I was that age I wasn’t even sure I could make it through a school dance without pissing myself.