Kevin Garnett Had One Simple Locker Room Rule After Boston Celtics Games, And He Took It Pretty Damn Seriously 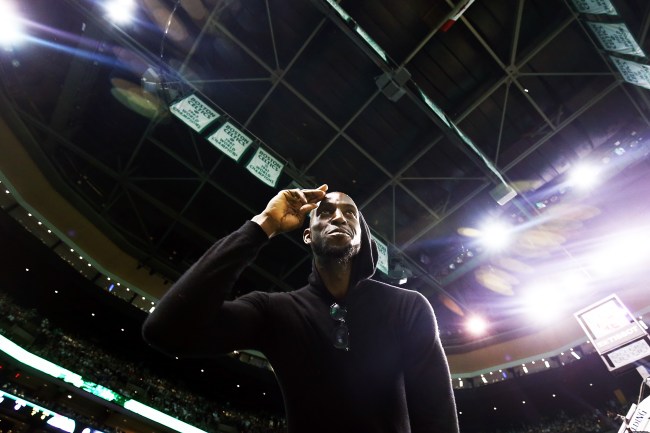 Kevin Garnett was one of the most intense basketball players ever, always playing with passion anytime he took the floor — and proving to be one wild trash-talker. Hell, the guy even gave us one of the great soundbites following the only NBA title he ever won while a member of the Boston Celtics, spewing out, “ANNNNNYTHING IS POSSSSSSSIBLE!” during a postgame interview. So, yeah, The Big Ticket typically wore his heart on his sleeve and didn’t care about what other people may have thought.

That mantra served Kevin Garnett well in a lot of what he did on the basketball court, but he may have wanted to tone it down a bit when the games were over. That’s because, former Celtics teammate Kendrick Perkins, told a story about an interesting postgame locker room rule that Garnett used to have: nobody, and KG meant nobody, should ever eat before players following a Celtics game.

It seems like a simple enough rule, right? Well, when Perkins joined ESPN’s Adrian Wojnarowski on “The Woj Pod” podcast, the recently retired big man talked about how serious Kevin Garnett took that rule, and gave a pretty hilarious (and intense) story about what happened when someone broke Garnett’s rule.

Here’s what Perkins said about KG’s interaction with the team doctor:

I remember one time, we use to order Maggiano’s, right? And we had spaghetti and all types of other (crap) going on on the buffet line, (crap) was good. So we come in after the game. Everybody knew this rule, right? ‘Hey man, don’t touch the food. Players eat first.’ This was established from Day 1, right? Dr. McKeon, obviously he didn’t get the message. So, I remember like yesterday, KG, he’s wrapped up in his towel coming out of the shower, he’s got a towel over his shoulders … He’s coming out shining and (crap), and he’s like, ‘Hey man, what the f— you doing?’ So everybody turns like, ‘Oh (crap).’ He walks over standing over him with that intimidating like, ‘Hey man, what the f— you doing? Hey man, players eat first. Matter of fact, give me this (crap).’ Took the plate, boom! Threw it in the trash right in front of his face. ‘Hey man, get out of here until the players finish eating man. F— wrong with you, man? I’ve already said this.’

Here’s what Perkins said about KG’s interaction with the video coordinator, whom the Celtics players called “Lucky”:

Lucky gets on the plane, I guess he forgot the memo, too. He comes up, he’s getting his food. So KG’s like, ‘Hey Lucky, what the f— you doing, man?’ So Lucky’s like, ‘What you mean, Kevin? I’m hungry. I haven’t ate all (day).’ (Garnett said), ‘I don’t give a f—. You know the rules. Players eat first. Give me this (crap). Matter of fact, go sit in the back of the plane and don’t come back up here until I tell you so.’ So I’m like, ‘Ticket, chill.’ (Garnett said), ‘Perk, what you want with me today?’ … So now me and him are getting into an argument over Lucky not abiding by KG’s rules. So man, yeah, that was the rule: Do not eat before the players. After that, you can eat whatever you wanna eat.

It sure sounds as if anyone who wasn’t a player even thought about food, Kevin Garnett was going to chew their ass out — which the former baller didn’t hold back from actually doing. See, told you the guy was intense AF during his playing days.

While the story makes Garnett sort of look like a total ass, Kendrick Perkins gave a bunch of other stories on the podcast that were contrary to that belief. But, man, imagine being the person who thought it’d be wise to sneak something to chow on before a Boston Celtics player got to eat, Kevin Garnett would wreck your soul.