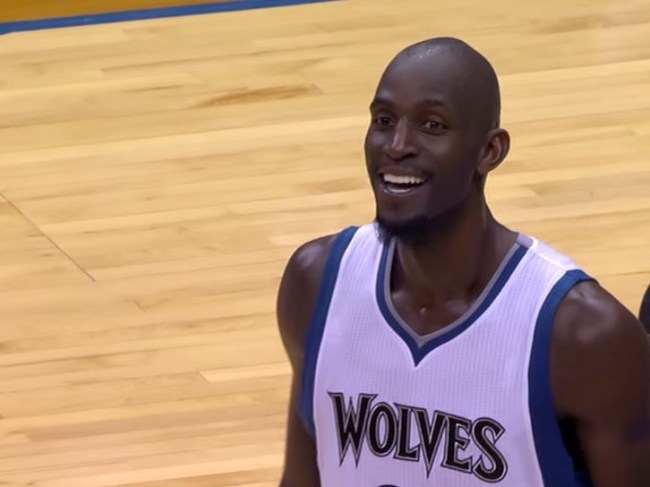 There’s dysfunctional, then there’s Jimmy Butler and the Minnesota Timberwolves dysfunctional — which is an entirely different level. To catch you up to speed, in the past few weeks we’ve gone from the four-time All-Star requesting a trade, to Butler holding a team meeting and anointing himself as the alpha dog, to the T-Wolves canceling practice the next day, to reports of a trade with the Miami Heat led to Pat Riley cussing out Minnesota’s front office.

Got all that? That’s just in the past two weeks or so, so, yeah, it’s been a total mess of a situation up in Minnesota. And, it doesn’t look like things are going to get better till the team decides to move their disgruntled superstar.

With all the wildness between Jimmy Butler and the T-Wolves, Kevin Garnett — an absolute icon from his playing days with the franchise — decided to weigh in on the situation. I’m not sure that makes things any better or not, but, hey, The Big Ticket is a future Hall of Famer who was (and still is) adored by Timby fans, so why not voice his opinion on the dysfunctional situation, right?

As you might expect, Kevin Garnett didn’t hold back words, telling The Atlantic that both Minnesota and Butler are being “a little delusional,” among other things. Here’s a snippet of Garnett’s interview with The Athletic’s Jon Krawczynski:

“I think both sides are a little delusional. I think Jimmy thinks his worth is a little more than what it is. He’s a very good player. I don’t see him on the (Kevin Durant) and LeBron (James) level. But if they are A-plus, he’s definitely A, A-minus.”

Calling the situation a “shit storm” might sound like Kevin Garnett’s crapping all over the franchise that drafted him out of high school, coming down on how they’re handling their current superstar. However, KG’s empathetic when it comes to what’s happening, as he continued by telling Krawczynski how he often created battles with his bosses during his playing career.

“You don’t think that I went crazy sometimes? Man, I was a damn Tasmanian devil,” Garnett said. “I would say shit at [Kevin] McHale. I would say shit at Flip [Saunders]. But it was all to motivate all of us. We had a big game against Chicago, and I’m just raising the level to what I’m expecting the next day to be like.”

“I never requested a trade because I viewed ‘Sota as mine,” said Garnett, who has a contentious relationship with current Wolves owner Glen Taylor. “I built this house. I’m not leaving this god damn house. You can get the fuck up out of here. You don’t like it, then leave. … I never asked for a trade because I never wanted to be traded.”

The transparency from Kevin Garnett is a welcome sight, but who knows if any of it will help the current situation between the Timberwolves and Jimmy Butler? With so much drama going on between the two sides, here’s to hoping some sort of resolution is near, because, although entertaining AF, Timberwolves fans can’t be excited entering a new season with a plot similar to a Keeping Up With the Kardashians episode.