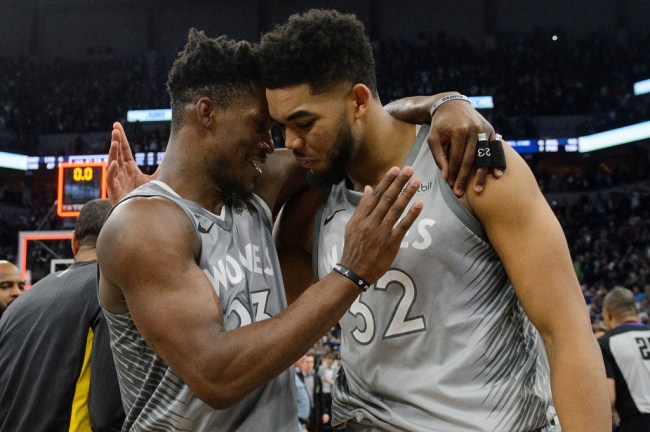 I am full to the brim with popcorn following this Jimmy Butler ‘KING KONG AIN’T GOT SHIT ON ME!’ saga.  We’re just a day removed from the 29-year-old going full scorched-earth at practice, saying things like ‘you can’t win without me!‘ while dominating T-Wolves starters with end of the bench scrubs.

Butler’s venom was directed president of basketball operations/coach Tom Thibodeau and general manager Scott Layden and T-Wolves stars Karl-Anthony Towns and Andrew Wiggins, who he called repeatedly called “soft” before storming out of practice without stretching with the team.

After Butler’s tantrum became mainstream, he sat down with ESPN’s Rachel Nichols and admitted that the situation in Minnesota isn’t fixable.

Welp, it looks like Butler may have denied the girl who asked him to prom but now has come scurrying back in the 11th hour after the head cheerleader gave him a stiff arm.

Via Shams Charania of The Athletic:

Timberwolves All-Star Jimmy Butler called a players-only meeting today, airing his feelings toward situation and management, per league sources. Butler expressed to players he would compete with them, as signs pointing to him staying with the franchise into the regular season.

Sources on @TheAthleticNBA @WatchStadium: Several players spoke up in players-only meeting, but Butler led it, made known his issues with management. His message was similar to one he displayed Wednesday: I run this. He's far too competitive to sit real games. https://t.co/Cwo8OCFY8m

Jimmy Butler calling a players-only meeting to air his grievances with a franchise he wants out of is like having a ‘what happened to *us*’ meeting with an ex you have no interest in getting back together with.

Butler probably shouldn’t have made it known that he wants out of Minnesota a week before training camp started, driving down his trade value and making it that much harder to find a team who wants to take on a player who will become a free agent next year and who one anonymous NBA GM ripped for drinking $4,000 bottles of wine and thinking he is LeBron or D-Wade.

RIght is left. Up is down. I don’t know what to believe.