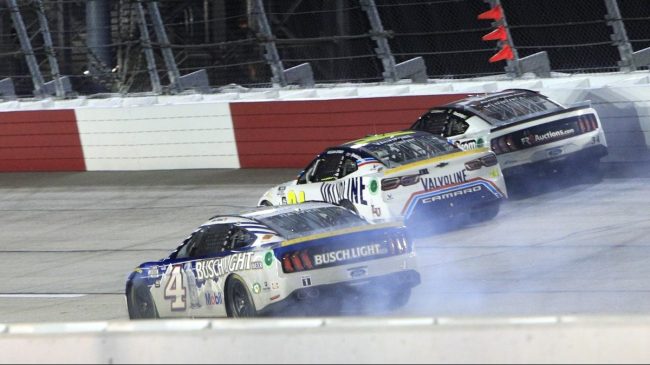 Kevin Harvick has never been afraid to speak his. The 2014 NASCAR Cup Series champion earned the sarcastic nickname “Happy Harvick” early in his career for his sometimes irritable temperament.

But in recent years, the 46-year-old veteran has cooled down and become one of the sport’s most affable drivers.

That wasn’t the case on Sunday night at the Southern 500, and Harvick had good reason for his anger.

Harvick’s 2022 season was a struggle for much of the first five months. The 60-time race winner struggled for speed and looked set to miss the NASCAR playoffs, something that hasn’t happened since the 2009 season.

But then things appeared to kick into gear for he and his Stewart-Haas race team. Harvick won his first race of the year at Michigan International Speedway to all-but lock himself into the playoffs. He then made it back-to-back victories a week later at Richmond, vaulting himself from outside the playoffs to a potential title favorite.

Much like in other sports, the NASCAR playoffs are about getting hot at the right time, and Harvick entered red hot. Apparently, it may have been too hot.

The playoffs began on Sunday night with the famed Southern 500 at Darlington Raceway. Harvick and his team struggled much of the night, but some patience and strong strategy had them in a good position late in the race.

A frustrated Kevin Harvick explains what happened inside the car as it caught fire. #NASCARPlayoffs pic.twitter.com/VK35Bal3kv

Harvick’s car overheated and caught on fire, leading to flames coming in through the dashboard and the entire car eventually igniting. The veteran driver blamed the fire on NASCAR’s “NextGen” car. The new 2022 car uses factory provided parts to all teams and has previously dealt with issues of catching on fire. But nobody had seen anything like what happened to Harvick, and he didn’t mince words.

“I’m sure it’s just the crappy parts on the racecar like we’ve seen so many times,” he said. “We haven’t fixed anything. It’s kind of like the safety stuff. We just let it keep goin’ and keep goin’…

…What a disaster, man. For no reason. We didn’t touch the wall, we didn’t touch the car, and here we are in the pits with a burned up car and can’t finish the race during the playoffs because the crappy-a** parts.”

Harvick finished the race in 33rd. He now sits 13 points below the playoff cut line with two races remaining in the opening round.