Key Boise State Starter Is Transferring 4 Games Into The Season 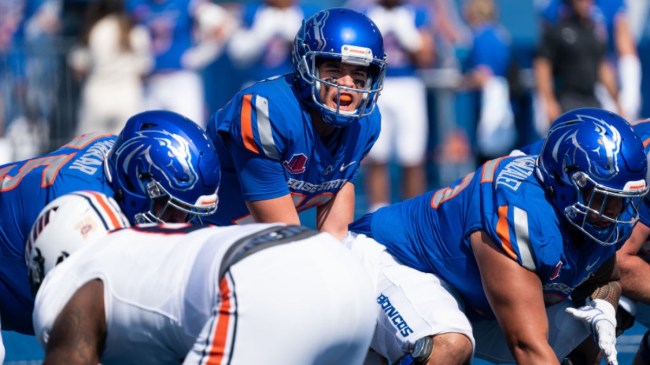 Boise State’s football program is in a tough spot right now. The team sits at 2-2 for the second consecutive season after a disappointing loss to UTEP over the weekend. The loss has the Broncos once again looking like they won’t factor in to the Mountain West title picture.

Today’s news won’t make their efforts to return to the top of the Mountain West any easier.

ESPN’s Pete Thamel revealed today that Boise State would be losing their starting quarterback as Hank Bachmeier has initiated the process to enter the transfer portal just 4 games into the season.

Boise State QB Hank Bachmeier (@qbhank19) tells ESPN that he’s initiated the process to enter the transfer portal. He’ll have two seasons of eligibility remaining wherever he goes next. His priorities in a new school are winning and NFL development. More: https://t.co/0nIR77ixAr

Bachmeier told Thamel that he’s looking for a school that will win games and help him develop for the NFL. Boise State hasn’t really been great for either of those things over the past couple of seasons.

Last year, Boise State finished the season 7-5 and Bachmeier only threw for 20 touchdowns in 12 games.

This season looked to be more of the same as Bachmeier managed only 497 yards and 6 touchdowns in 4 games.

With the decision to transfer now, Bachmeier preserves a year of eligibility, leaving him with 2 more. However, if his goal is the NFL, that second season likely won’t matter. He’ll need to make a splash next season to attract scouts as teams around the league likely won’t be interested in a QB that needed 6 years to breakout in college.

Wherever he goes, Bachmeier will have plenty of experience to offer for his new team.