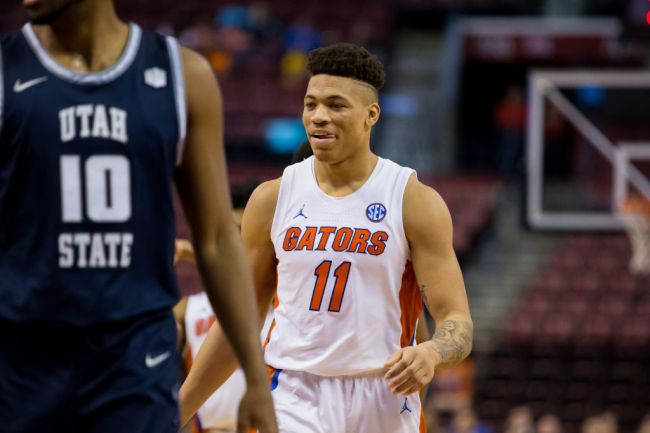 Keyontae Johnson, the SEC’s preseason player of the year, is on the road to recover after suffering a scary collapse during Florida’s Dec. 12 game against Florida State. The 21-year-old fell to the floor coming out of a timeout in the first half and was rushed to the hospital in critical, but stable condition. He was diagnosed with inflammation of the heart that kept him under close medical watch for 10 days, before he was eventually released to continue his recovery at home. Johnson subsequently returned to the team a week later in a coaching role.

He, his family and the university released an update on his health at the beginning of this month, saying that the condition is unrelated to his positive COVID-19 test over the summer and that he will be allowed to return to campus, class and his team. While he will be around the court, he will not return to play this season.

With that in mind, however, his teammate Tre Mann posted an Instagram story on Thursday of Johnson shooting in Florida’s indoor practice facility. With his goal to get his health in order and play next season, the video seems like a positive sign that he is on track.

After collapsing on the court during Florida's game on Dec. 12, Keyontae Johnson is back getting shots up 🙌pic.twitter.com/I26lrSkQVd

Johnson, who will be a junior during next year, stands 6-foot-5, 299 pounds and was averaging 16 points per game in 2020 before his season came to an abrupt ending. He led the Gators with 14 points per game and 38 total steals in 31 appearances as as sophomore. His health comes first, but when he is ready to return, Johnson will be a big factor in Florida’s ability to compete within the Southeastern Conference.