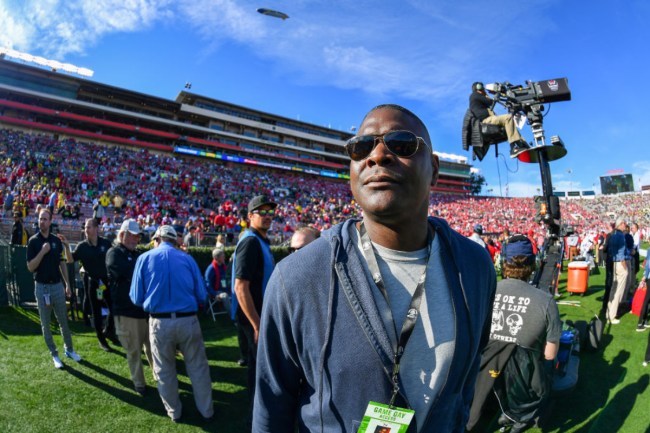 Urban Meyer’s short tenure as the head coach of the Jacksonville Jaguars was worse than anyone could have ever imagined. Despite the disaster in Jacksonville, Meyer is still one of the greatest college football coaches to ever do it and a program may come calling sooner rather than later.

While Meyer will likely return to Fox Sports’ ‘Big Noon Kickoff’ this season, it wouldn’t be that big of a surprise to see him back on a college sideline the following year, at least not in Keyshawn Johnson’s opinion.

During Wednesday morning’s edition of ‘Keyshawn, JWill & Max,’ Paul Finebaum and Johnson got into a heated discussion about Meyer’s future in coaching. Finebaum is of the opinion that Meyer is going to have an extremely tough time ever finding another big-time coaching gig, but Johnson doesn’t see it that way at all.

Finebaum challenged Johnson to name the school that would be “the ceiling” for him and Johnson threw a haymaker by saying the University of Texas.

That faint noise you hear coming from outside is every person living in Austin simultaneously saying ‘you know what, Urban Meyer may be a good fit for the Longhorns.’

Texas Is Back, Don’t You Forget It

Texas went 5-7 last season, and while it was Sark’s first year at the helm, the Longhorns left much to be desired. While Texas should be better this season, this is still a program that hasn’t won more than eight regular-season games in three years.

While we don’t know what the future holds for Texas football, we do know that an Urban Meyer-led Longhorns team as they make their way to the SEC in the coming years would be something to behold.