Keyshawn Johnson Goes On Outrageous Rant About USC Being ‘On The Same Level, If Not Better’ Than Ohio State 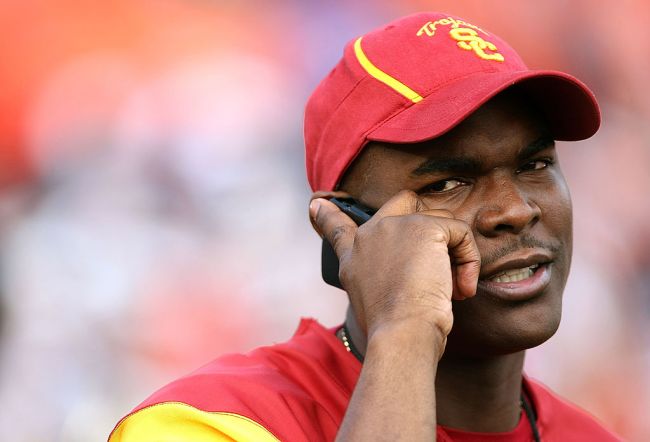 USC athletic director Mike Bohn recently gave praise to Ohio State for being in the conversation for a berth in the College Football Playoff and Keyshawn Johnson didn’t like it, he didn’t like it one bit.

The former USC wideout shared his extreme frustration with Bohn on Tuesday during a segment on ‘Key, Jay & Z.’ Johnson immediately took a shot at Bohn coming from Cincinnati and claimed he didn’t understand what a Trojan was all about. If being a Trojan means being extremely biased and making outrageous arguments, then Johnson is a great rep for the Trojan brand.

The real craziness came when he tried to make the claim that the Trojans should be considered for the CFB Playoff just like the Buckeyes because they too have a 5-0 record. That’s all fine and well, but he wasn’t just done there, he went on to say that “Ohio State ain’t no bigger than USC, we on the same level, if not better.”

He made that statement with a straight face.

“That’s what we get for hiring a dude who doesn’t understand what being a Trojan is all about!”@keyshawn EVISCERATED USC Athletic Director Mike Bohn for not campaigning harder for USC to make the College Football Playoff over Ohio State. #KJZ pic.twitter.com/jnjOVHTX0d

Johnson has every right to call out USC’s first-year AD for his somewhat random endorsement of another school, it doesn’t make sense at all Bohn did that, but his statement about USC being on the same level as Ohio State is outrageous.

If we’re talking about just this season or the football programs in general, that statement is just not true.

Cool, USC has a 5-0 record just like the Buckeyes, but USC plays in the PAC-12, without question the weakest Power Five conference, and the Trojans ‘signature win’ this year was a five-point win at UCLA. Ohio State’s resume isn’t that strong either, but the Buckeyes do have a solid win over a good Indiana team, a quarterback named Justin Fields, and one of the most well-balanced teams in the nation.

If you want to look at claimed national titles, the Trojans have the 11-8 edge there over the Buckeyes, congrats to USC fans for being able to hang their hat on that one, but it is crystal clear at this moment that USC isn’t in the same stratosphere as Ohio State.

USC has always been looked at with rosey, overpriced Los Angeles shades on and that’s exactly how Johnson is looking at the Trojans. USC may be the king of the LA bubble, but it’s not the elite program it used to be and has absolutely no business being in the conversation for a CFB Playoff spot this year.