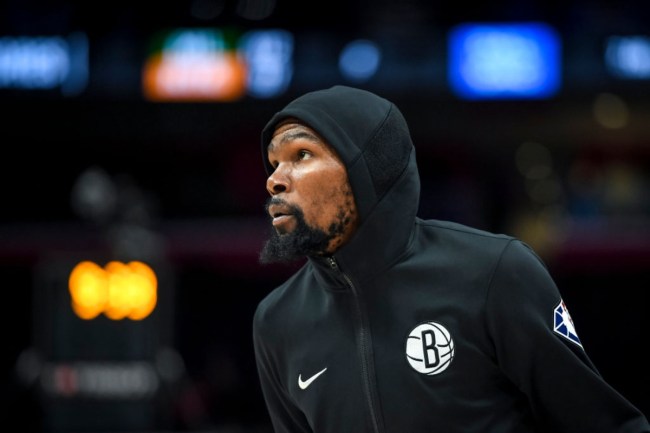 Kevin Durant talks trash with the best of them. Whether it be on the court, to fans bad-mouthing him during games, or on Twitter, KD simply does not care.

As we saw earlier this week, Durant doesn’t even care if the person he’s talking trash to is in middle school.

Overtime tweeted out a clip of eight-grader Jayden Moore pulling off a ridiculous move during a basketball game and KD was not impressed, not even a little bit.

Durant was far from the only person on Twitter calling the absolutely ridiculous move absolutely ridiculous, but he was certainly the most high-profile person to share such harsh criticism. A 33-year-old superstar trash-talking a kid online may seem a bit extra, but hey, there are no rules on the Twitter streets.

Moore – who is again just a middle schooler – took KD’s harsh words in stride on Twitter.

Thanks for the constructive criticism.. I’ve grown from my 6th grade year! Maybe we can work on some stuff together!! All love🖤 Hopefully I can get to where you at one day! #keepgrinding

Moore recently spoke with Josh Peter of USA Today about Durant calling his move out on Twitter and explained he was hurt by KD’s words.

“Like, what made him take time out of his day to say something negative instead of encouraging me or telling what really needs to be done and then texting me privately or something like that,” Moore said.

“There’s almost an immaturity with them to take the time to even go on Twitter and look at that (video) and comment,” Novak said.

Moore’s father, Paul, said he bet his son $10 that he couldn’t pull off the move without getting called for a travel. Moore’s team was up by 50 points when Jayden decided to try the move.