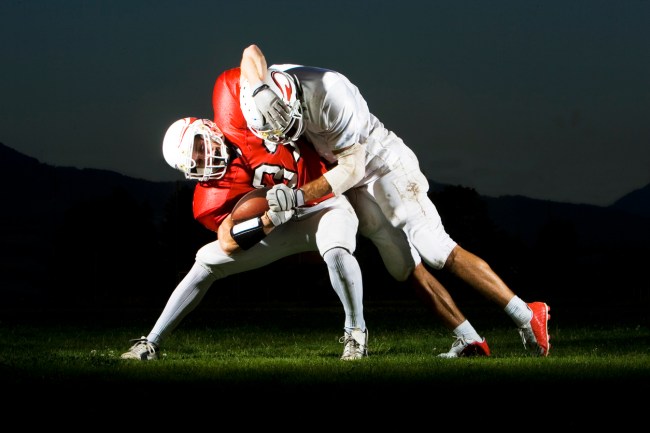 Semi-professional football is truly a world of its own. There is a very minimal regulatory body, if any, and players participate on their own accord. Many of them have day jobs and then suit up at night.

Over the weekend, one of the crazier moments occurred during the American Football Alliance playoffs. A tackle was made live on Facebook.

While that may not seem particularly out of the ordinary, the way in which it went down is downright wild.

On Saturday afternoon, the Carolina Spartans hosted Kings Mountain Force in the second round of the AFA playoffs at Charleston County School District 4 Stadium. After the Spartans got on the board first with a touchdown, the 9-1 Force scored 31 unanswered points to win.

With the win, Kings Mountain Force advanced to the AFA semifinals to meet the Virginia Storm. Should they win on June 11, they would advance to the league championship game in Tuscaloosa, Alabama at the end of the month.

If giving up 31 unanswered points to lose wasn’t demoralizing enough, the Spartans got put on blast on Facebook Live in a completely unprecedented move that is absolutely crazy. At some point in the second half, one of the Force players brought his phone onto the field.

As the game was happening (it was not a stoppage of play, it was during the game), the player went live on Facebook.

What happened next was insane. The Force player proceeded to get downfield, phone in hand, and LAID THE SPARTANS BALL-CARRIER OUT!

The entire thing, from the snap to the whistle, was caught on camera and broadcast to everybody live on Facebook. Of course, both the player holding the phone and his teammates went insane.

Obviously, there has never been anything like this in professional football. It was absolutely unhinged and totally epic. The closest that a player has come to going live on the field during a game in the NFL was Joe Horn’s touchdown celebration with his cellphone.

Hopefully the Force get up big again in the semifinals and this becomes a trend. BONKERS!