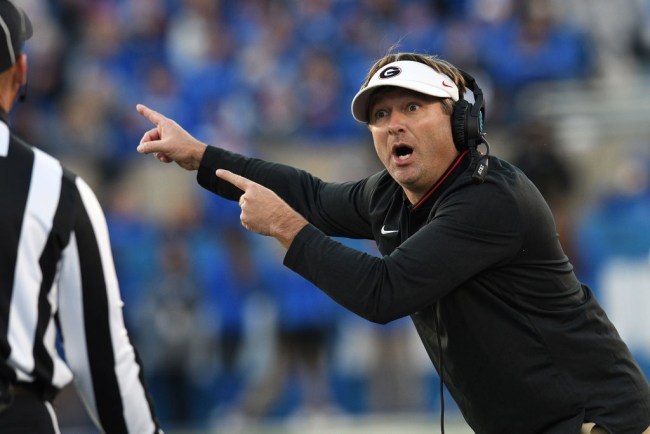 Netflix’s latest docuseries ‘Tiger King‘ is a wild ride. It’s one of those shows where you’re watching it and you think that things can’t possibly get any crazier, but then they absolutely do. I’m honestly not sure if I even blinked while watching the first two episodes.

Having said that, the story of Joe Exotic definitely isn’t for everyone. The show certainly teeters on that fine line of ‘this is the stupidest shit I’ve ever seen’ and ‘I’m going to binge-watch the entire show in one day because it’s so mind-blowing.’

It turns out that the show isn’t Kirby Smart’s cup of tea.

The Georgia head coach explained that he was dying to find a show to watch during his self-quarantine, but after the first two episodes, he just couldn’t continue watching.

“I just couldn’t do it, man. I couldn’t stomach it. And everybody continues to talk about it, but my patience wears thin. I’m looking for a little more plot, a little more — I don’t know what the right word is. But that’s not my cup of tea. I’ll just say that. I’m more of “Ozark” guy.”

In Smart’s defense, the first two episodes are an absolute rollercoaster. You step into the world of running a zoon in the middle of nowhere Oklahoma, meet Joe Exotic, his husbands and (spoiler) an arm gets ripped off by a tiger. It’s about as intense of an opening two episodes of a documentary you will ever see.

To be honest, however, I actually would have pinned Smart to be a big ‘Tiger King’ guy. I honestly thought that most college football coaches under 50, especially coaches in the SEC, would be all about Exotic and the funky bunch. Those guys live an intense life, but it doesn’t compare to what Mr. Exotic has done over the years.

Somebody needs to get in Smart’s ear and let him know that the show does settle down just a bit after the first two episodes. They very clearly wanted to pull you in during the opening two episodes before getting into the more legal side of the story.

Sorry Georgia fans, but it may be time to officially put Smart on the hot seat given his take here. Maybe if he finishes the show he’ll gain that extra chip on his shoulder to actually lead the Bulldogs to an SEC title.