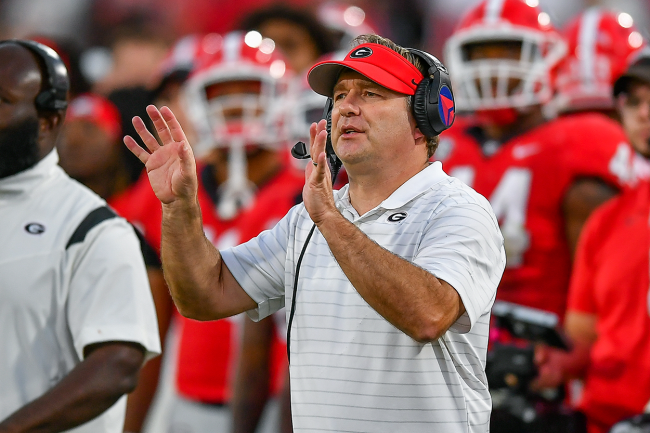 When Kirby Smart took over as head coach of his alma mater in 2016, there was a lot of hope that he could get the program back to the national championship level. Five years later, his team is in prime position as the No. 1 team in the College Football Playoff rankings.

However, according to his wife, all of this almost never happened.

During the 2015 coaching cycle, Smart was considered one of the top, if not the top name. As a result, every program in the country was reaching out about his interest.

One program in particular that was not Georgia piqued his interest. That team was South Carolina— and, apparently, it was pretty close to a done deal.

Here is what his wife, Mary Beth, had to say on a recent appearance on 960 The Ref:

“We were really close to taking South Carolina at the time,” she said. “… The AD [Ray Tanner] and one of the athletic administration guys were in the kitchen meeting with us that morning Coach (Mark) Richt was fired. It was leading down that road. The way the timing fell for him was really special.”

Obviously, that did not happen. He did not go to South Carolina.

The Gamecocks had gone 3-9 during the 2015 season. Hiring Smart, a longtime college football assistant and former defensive coordinator for Alabama, was a smart move. Pun intended.

But, when Georgia fired head coach Mark Richt in November of 2015, there was no way Smart was turning it down after playing for the Bulldogs from 1995 to 1998. After Smart went back to his alma mater, the Gamecocks hired Will Muschamp.

Muschamp has since been fired. Smart is leading his team to the Playoff.