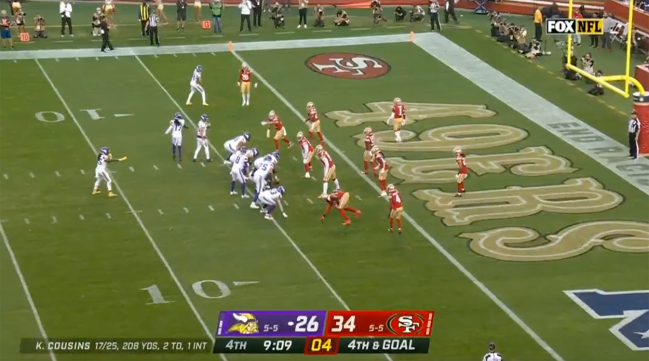 Kirk Cousins made an embarrassing mistake during Sunday’s game against the 49ers. His reason for the mistake does not inspire confidence.

As the Minnesota trailed by eight with just over nine minutes left, the offense faced a 4th-and-3 at the San Francisco 3-yard-line. So, essentially a 4th-and-goal.

Cousins broke the huddle, walked up to the line of scrimmage in the backfield. However, instead of setting up under the center, he lined up behind the right guard. Not even in the shotgun.

In a moment of sheer panic, running back Alexander Mattison scurried over and tried to push his quarterback to the correct spot under center. His effort proved in vain as the play clock wined down and Cousins was forced to call a timeout.

As a nine-year veteran, it is pretty embarrassing for Cousins.

Sure, mistakes happen. Yes, this is not something that has never happened before. But considering the down and the situation, to line up under the right guard is a brutal look.

The Vikings had to take a timeout before their 4th down play as Kirk Cousins lined up under his guard and tried to take the snap. pic.twitter.com/M9aNgeN0pj

To make matters worse, after the timeout, Cousins over threw his receiver in the end zone. It wasn’t even close to a completion and the 49ers took over on downs.

After the game, in response to the blunder, Cousins did not instill any confidence. He was quick to move on.

“We just didn’t get lined up properly and the play clock was winding down,” Cousins said. “I was just moving, trying to get everybody settled up and just got under the wrong guy.”

While his answer is totally reasonable, as the starting quarterback of an NFL franchise that is losing by a touchdown with a chance to score a touchdown, Cousins should not have lined up under the right guard. That is simply something he can’t do.

And for him to lack a legitimate excuse is not great. If he had a more understanding reason for why the blunder took place, things might be different. But Cousins essentially had a brain lapse in one of the biggest moments of the game, which is simply not what you’re looking for from a franchise quarterback.

You can find his full comments here: