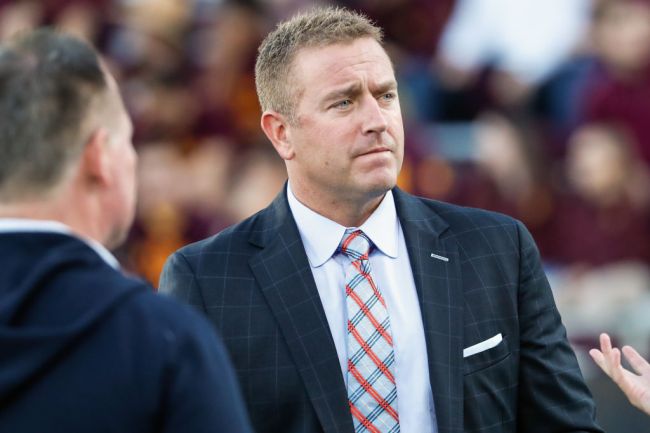 Vanderbilt became the second team in the SEC to fire its football coach this season as the Commodores elected to part ways with Derek Mason following their loss to Missouri. The Dores are 0-8 this season and Mason ended his career in Nashville with a 27-55 overall record.

Now, the coaching search begins for Vanderbilt, which is one of the more unique and probably the most difficult spot among all Power Five teams.

ESPN’s Kirk Herbstreit offered up his top candidate for the job shortly after the Mason firing and he believes that Vandy could go with former Commodore now Notre Dame defensive coordinator Clark Lea.

“I know Clark Lea — he went to high school (where) my boys go to high school here, Montgomery Bell Academy, I think he went to Vandy,” Herbstreit said on Monday’s episode of the ‘CFB Podcast with Herbie, Pollack & Neghandi.’ “So his name’s going to be prominent because of the job he’s doing with the Notre Dame defense. He’s going to be a head coach, whether it’s next season (or not). Jeff Hafley edged him out to get the (Boston College) job, so he’s a name that’s going to be out there.”

Lea, 38, played football at Vanderbilt from 2002-2004 before taking a graduate assistant role at UCLA in 2006. He made stops at South Dakota State, Bowling Green, Syracuse, and Wake Forest before joining the Fighting Irish staff in 2017 as a linebackers coach. He certainly has the Notre Dame defense playing at a high-level this season as it ranks 10th in the FBS allowing just 16.7 points per game.

As I stated earlier, being the head coach at Vanderbilt is an extremely unique position. On the one hand, you’re coaching at one of the most prestigious universities in the South, but it’s also a private school with extremely high academic demands. It’s a small school that simply can not compete with any of its fellow SEC schools on the recruiting trail.

There are far worse schools to coach at and far worse towns to live in then Nashville, but taking over Vandy is a project, especially with the state the program is in now, not to mention the many changes that have happened over the last two years or so in the athletic department.