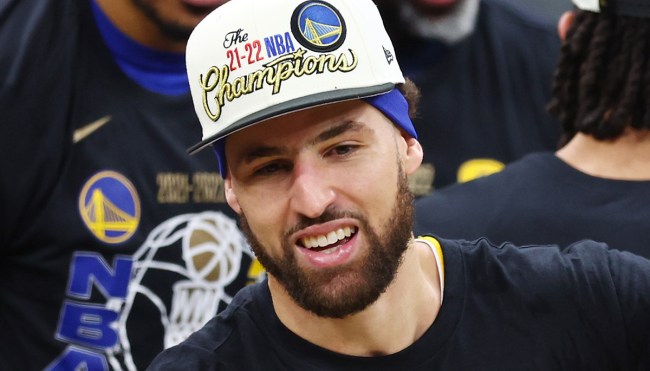 Over the past few years, championship parades have managed to produce a number of incredibly memorable moments thanks in no small part to people who probably have no recollection of them after going a little too hard over the course of the festivities.

There’s no more notable example than Tom Brady, who had himself a day in Tampa Bay after the Buccaneers won the Super Bowl in 2021. The quarterback admitted he may have been overserved when he decided it would be a good idea to target Rob Gronkowski while passing the Lombardi Trophy between boats, and based on how he looked when he got back to dry land, it definitely seems like that was the case.

Now, we have another water-related parade incident courtesy of Klay Thompson, who fell victim to a bit of wardrobe malfunction after hopping on his boat to head to San Francisco and link up with the fellow champions who will parade through the city on Monday to celebrate Golden State’s most recent NBA championship.

Thompson has been regularly streaming his excursions on his beloved vessel, and thousands of people who tuned in to watch him make his way across The Bay saw the commemorative championship hat he was rocking fly off of his head and into the water.

.@KlayThompson really lost his hat on the way to the parade 🤣 pic.twitter.com/V0GZKCG8oo

Thompson admitted “That hurts,” but it didn’t take him long to don an alternative, as he quickly replaced it with the captain’s hat he apparently had locked and loaded for situations just like this:

“Keeping it real goes wrong, people. That’s why you gotta strap it in tight. Captain’s hat is nice for that”

How can you not love that man?