Tom Brady Says His Memory Of Tossing Lombardi Trophy Is Foggy: ‘I Was Not Thinking At That Moment’ 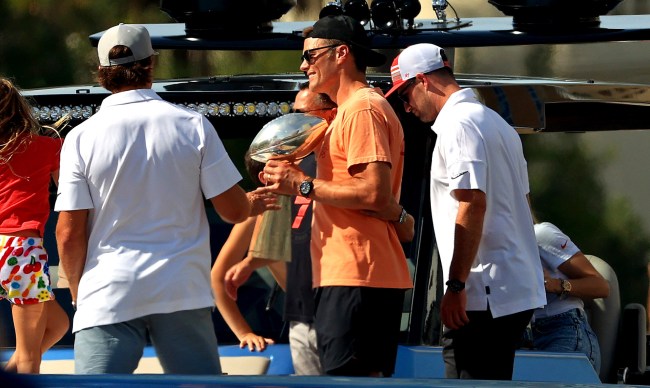 Hands down the best part of the Tampa Bay Buccaneers Super Bowl victory boat parade was when a very loose Tom Brady tossed the Lombardi Trophy from one boat to another.

That daring maneuver by TB12 led to complaints from the daughter of of the Lombardi Trophy sculptor and one of the best t-shirts ever worn to Major League Baseball spring training.

So, when Brady showed up Tuesday night on The Late Late Show with James Corden, naturally that was one of the main focuses of the conversation.

During the discussion, Brady stated the obvious, telling Corden that while everyone else will remember that move for years to come, “I don’t remember that quite as well!”

“First of all, I was not thinking at that moment. It was not a thought. It was, ‘This seems really fun to do,’” Brady explained with a chuckle. “Not to mention, when you get your hands on one of those trophies, there’s a lot of really sharp edges on the bottom. … I found out later, had that been an incomplete pass, that would have went down like 80 feet. I’m so happy that [tight end] Cam [Brate caught it].”

Another key part of Brady’s toss was the fact that his 8-year-old daughter Vivian was going nuts, shouting, “Daddy, no!” telling Tom not to throw the trophy.

“That’s my little 8-year-old daughter,” Brady recalled. “Who could imagine that an 8-year-old girl would have the most sense of anybody in that whole area at the time? She’s the voice of reason. Go figure. It was really cute.”

Brady also talked about his and the team’s approach during what was a very unusual NFL season.

“It was very different because where I was for 20 years was, obviously, it was great for me, it was spectacular, I wouldn’t change anything, and I think that when we’re at that point at the Patriots, everyone at the start of the season would be like ‘well, who are you guys playing in the championship game?’” said Brady.

Brady also revealed that after the game, and his seventh Super Bowl win, his wife Gisele Bundchen asked him, “What more do you have to prove?”

He told Corden that when he heard that he tried to change the subject. Bro is never going to stop, is he?