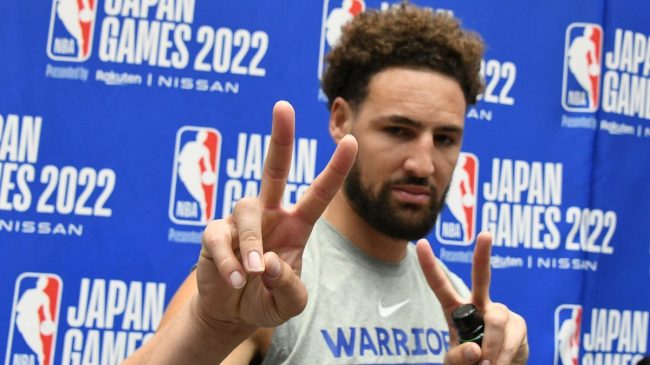 Golden State Warriors superstar Klay Thompson has always come across as a pretty easygoing guy. Whether it’s giving man-on-the-street interviews about New York City scaffolding, or slamming a beer at an LA Dodgers game, Thompson truly comes across as just one of the guys.

But every now and then Thompson offers up a reminder that he’s not just a future Basketball Hall of Famer, but also a pretty damn cool guy. Nothing shows this off quite like the video that the Warriors put out on social media on Thursday.

Thompson is often outspoken about his love of the San Francisco Bay as well as his love of boating. He lost his hat while on a speed boat to Golden State’s championship parade this summer. He also has a ritual of swimming in the Bay prior to big games.

But neither of those is quite as cool as Thompson’s method of transportation to and from the Chase Center for Warriors’ practices.

Golden State shared a video on Twitter on Thursday showing Thompson and his bulldog, Rocco, traveling via his boat to a dock near the Chase Center before walking to the facility for practice.

How does Klay Thompson get to practice?

“Rocco’s not exactly the best water dog. But he’s got a good spirit about him on the boat,” Thompson said.

Golden State begins its NBA title defense on Oct. 18 against the Los Angeles Lakers, who are dealing with the complete opposite vibes heading into the season opener.