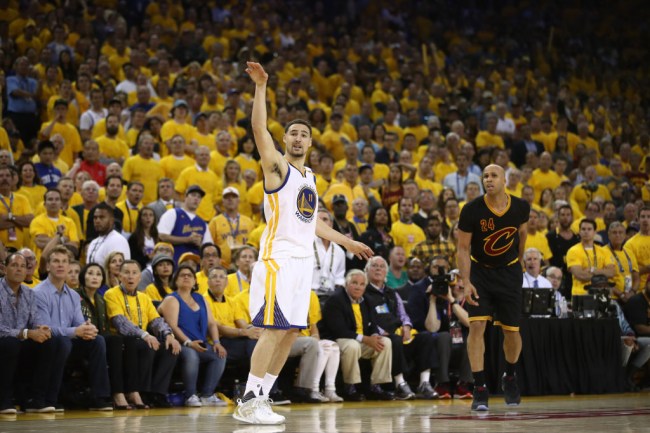 Since 2011, Klay Thompson has garnered the reputation of the silent assassin. A dude who once scored 60 points while only dribbling the ball 11 times. A four-time NBA All-Star who drilled 11 threes and scored 41 points in a critical 2016 Game 6 against the Thunder.

But you won’t see the 28-year-old creating Twitter aliases to defend himself or making a habit of kicking opposing players in the nuts. Klay, for as good as he is, has largely been a mystery, stoic and measured.

But a recent profile by SLAM Magazine shines some light on who Klay Thompson The Person is.

I think he’s my new best friend. You can read the whole article here, or check out three interesting takeaways below.

Klay is a dog lover and a really good friend.

Earlier that week, 1,340 miles away in Orange County, CA, Philippe Zarif, a friend of Thompson’s from high school, suffered a loss. Zarif’s dog, a 13-year-old purebred boxer named Tyson who was the star of his owner’s Instagram account, died without warning. The loss cut Zarif deep, but he didn’t expect its impact to reverberate beyond his immediate family. That’s why he was so surprised when, on the morning of Game 6, Thompson texted him, “This one’s for Tyson.”

Klay said: “I know loved ones come in different capacities, whether it’s human or animal, so he was really in my thoughts.”

Thompson would score 41 points in the comeback victory, including 19 in the fourth quarter.

Klay doesn’t need a camera following him around when he does nice things.

This past November, Chris and Jonathan Baxter, two brothers in their mid-20s, were killed in a tragic car accident. The Baxters, staples in the SoCal basketball community who were known for their love of the game, would work out with Thompson in the offseason. “Those two guys,” says Torres, “would drive from anywhere to come defend and rebound for Klay.”

When Thompson heard about the tragedy, he felt sharp pains in his stomach. How could they—two young dudes who just loved hoops—be gone? It didn’t make sense. Due to the NBA schedule, Thompson couldn’t attend the funeral or the accompanying services. He did, unbeknownst to most, finance the repast.

Klay is a sick boarder, bruh.

“I wouldn’t say I’m nasty, but I’m probably the best NBA player on a skateboard,” says Klay, who grew up near Ladera Ranch Skatepark. “I’m contractually obligated not to skate anymore, but I’ll go out on a limb and say I’ve probably still got it.”

“There are people that say they can skate, but Klay could really skate, dude,” says pro skateboarder Ryan Sheckler. “He’s smart, but he’s got no fear. He just lets life happen. That’s one of the reasons he’s so fun to be around.”

Such a cool guy and he doesn’t even know it.