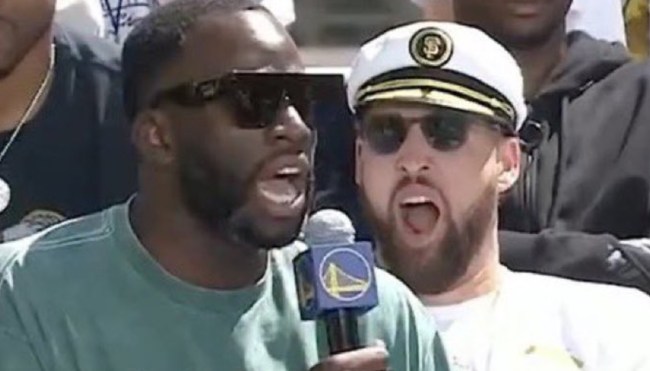 I don’t think anyone actually expected Draymond Green to stay home after he floated the notion of skipping Monday’s championship celebration in San Francisco when he learned organizers had opted to forgo one of the post-parade rallies that have the tendency to produce some very unfiltered quotes delivered by equally overserved athletes.

As a result, it wasn’t shocking to see Green front and center when the Warriors assembled to address a small crowd of fans before hitting the city’s streets—just like it wasn’t a huge surprise to see him take full advantage of the moment and decline to mince his words when he was handed to the microphone.

Green is one of those guys who will not think twice about saying what is on his mind, so it was only natural that he came hot out of the gate with one of his vintage diatribes.

“I’m just going to continue to destroy people on Twitter as I have been.”

“And as always, f— everybody else.”

Draymond does not care 😂 pic.twitter.com/1d0BaNJkwa

However, Green had some of his thunder stolen by none other than Klay Thompson, who didn’t attempt to hide the yawn he unleashed during one of the spiciest moments of the speech while rocking the hat he was forced to settle for after falling victim to an unfortunate mishap on his way to the gathering.

It didn’t take long for the image to go viral, as NBA fans made plenty of jokes (including plenty of podcast references) while introducing the world to what I can only imagine will soon become the subject of a Know Your Meme entry known as  “Yawning Klay.”

Me sitting at the adult table during thanksgiving pic.twitter.com/ICJPbkSUPo

Klay been here before 🥱 🤣 pic.twitter.com/GU4cC8E91e

“And that’s why I love stamps dot com…” pic.twitter.com/SsqnSXujbf

"Kyle, turn the camera on" pic.twitter.com/cVKeu07gnd

We’ve all been there.