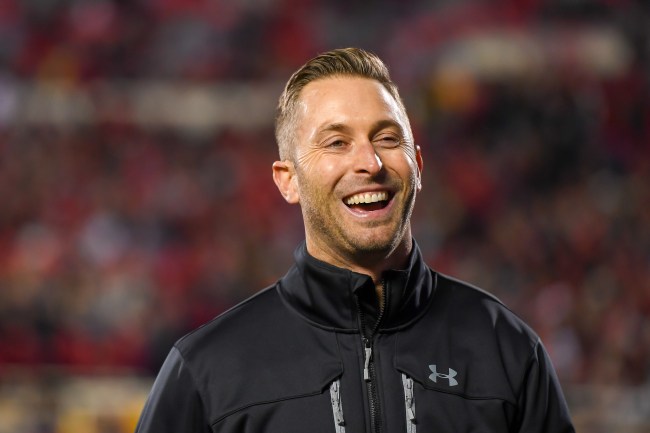 Kliff Kingsbury seems like a mediocre coach to me. I mean, sure, the guy has GQ style and charm, but, when it comes to winning football games, he’s sort of the middle of the pack. Yes, he recruited and coached this year’s, potential, NFL MVP, Patrick Mahomes, at Texas Tech, but with a career head coaching record of just 35-40 in his five years in Lubbock with no major bowl games, it’s hard to believe this guy’s the next coming of Bill Belichick.

But f*ck my opinion of Kliff Kingsbury, because it hasn’t stopped both college programs and NFL teams from literally fighting for his services — with the Arizona Cardinals winning that staring contest, wrestling the former Tech head coach and short-lived USC Trojans offensive coordinator to become the team’s next head coach, per ABC 15.

Per sources, Kliff Kingsbury is finalizing a deal to become the Head Coach of the Arizona Cardinals. @nflnetwork @gmfb @NFLonFOX

Given the fact that Kingsbury’s record is, well, not great, he hasn’t won anything of significance, didn’t have a top-10 recruiting class during his time at Texas Tech and then did the B.S. move of signing with SC as O-Coordinator just a few weeks ago before bolting, Twitter had some serious reactions to the Cardinals deciding he’d be their head coach. Of course, most of them were heated, with some of the best below; so take a look.

The Entire NFC West knowing they get to play Kliff Kingsbury twice a year. pic.twitter.com/GUWoV0Z4qK

Kliff Kingsbury is the worst coaching hire in nfl history

Larry Fitzgerald after hearing the Cardinals are hiring Kliff Kingsbury as their coach pic.twitter.com/1XCGwaWwMo

So Kliff Kingsbury gets fired from Texas Tech then gets an NFL head coaching job pic.twitter.com/DEy3zEcVk8

Kliff Kingsbury, who has no NFL coaching experience who recently got fired at Texas Tech can get a NFL head coaching job but Jim Caldwell, who took the Colts to a Super Bowl and the Lions to three winning seasons can not?! pic.twitter.com/Hyrs3ydVPE

I was kinda down on Green Bay’s head coaching hire then the Cardinals hired Kliff Kingsbury pic.twitter.com/13V9KEBwQt

Kliff Kingsbury over a Mike McCarthy or a Josh McDaniels? pic.twitter.com/M8nIqnqjmq

I want to be like Kliff Kingsbury when I grow up.

I know the name of the game is offense these days, and, to his credit, Kliff Kingsbury’s teams have always been able to light up the scoreboard, but am I missing something here? The dude is under .500 as a head coach, yet, somehow, he gets a head coaching job. If nothing else, the Cardinals are getting a good looking dude to stand on the sideline, so at least the women in the stands will have something to swoon at, but, sh*t, the Internet doesn’t appear to think they made the right decision when it comes to winning football games — and the proof is in the pudding based off what Kingsbury’s shown to this point.