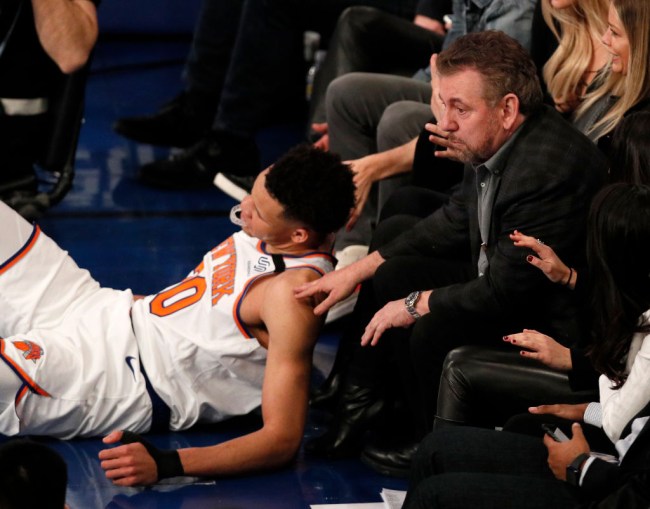 Ah, yes, the first ‘Knicks doing Knicks things’ moment of the year is upon us and we’re just 10 games into the season.

On Sunday the Knicks welcomed the Cavaliers to Madison Square Garden for a contest between two of the lowliest teams in the NBA. Well, it turns out the Knicks are much, much worse than the Cavs as they were handed a 108-87 loss falling to 2-8 on the season.

It turns out that the loss alone wasn’t quite embarrassing enough for the Knicks.

The Cavs held an 18 point lead at halftime and ‘fire Dolan’ chants broke out at MSG. James Dolan, the CEO of The Madison Square Garden Company and day-to-day operator of the Knicks, wasn’t too happy with those chants and the fan that started them was found by security and ejected from the game.

This shouldn’t come as a surprise to anyone. Dolan reportedly had a person kicked out of a music festival because they suggested he sell the Knicks last year.

New York fans have been through the ringer for years on end at this point and after missing out on Zion Williamson in the NBA Draft and free-agents like Kevin Durant and Kyrie Irving this summer it’s safe to say supporters have hit a new boiling point.

Meanwhile, the Knicks’ third-overall pick this year, R.J. Barrett, is averaging 15.5 points and nearly six rebounds a game, but those efforts aren’t being noticed thanks to incidents like these and the team sitting at the bottom of the Eastern Conference standings.

Mark is a New York City-based writer and editor at BroBible. You can follow him on Twitter @MarkAndHisWords.