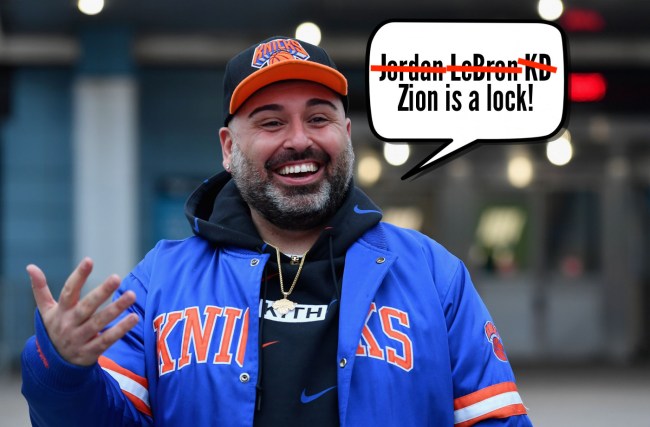 Stop me if you’ve heard this before but Knicks fans have definitely totally undoubtedly found a Savior who can pluck them from 20 years of NBA mediocrity and deliver them a playoff run.

Somewhere in a frayed John Starks jersey, Spike Lee is penning the treatment to A Road To Zion and phoning Jonah Hill to play Tom Thibodeau. The 38 NYC residents who haven’t jetted to Miami during the pandemic dance in the piss-smelling streets as de Blasio and Cuomo argue over who’s going to take credit for it.

Before Zion Williamson geared up to play his first NBA game at Madison Square Garden on Sunday night (a 122-112 overtime loss), the 20-year-old lit up like mom just declared the pizza rolls ready when asked about playing in New York City.

“I’m glad you asked that actually. New York is the Mecca of basketball. I love playing here. I played here in college and this is my first time playing here in the pros. This atmosphere, whether they’re cheering for you or whether they’re booing for you, it’s amazing. Outside of New Orleans obviously, this might be my favorite place to play. I can’t even lie to you.”

(Zion finished with 34 points, 9 rebounds, and 5 assists in his first ever pro game at MSG).

Sure, Jordan, Kobe, and LeBron have all said nearly identical things about playing at MSG and have stifled NYC’s advances time after time, but far be it for me to yuck on someone’s yum.

Zion before and after getting asked about the Knicks pic.twitter.com/RK1UWpgEk5

Zion: “Outside of New Orleans, New York may be my favorite place to play”

New York is back pic.twitter.com/GirF7zwocg

*Zion thinking about the Garden* pic.twitter.com/1bTNPzgH7C

How Zion gonna leave the Pelicans for the Knicks pic.twitter.com/lvCTyeuBuN

Zion is under contract until after ’22-’23 season, but in the landscape of player empowerment, gone are the days of Scottie Pippen playing a decade for single team that’s paying him in Applebee’s gift cards. Zion to the Knicks is a mortal lock. Definitely. Probably.