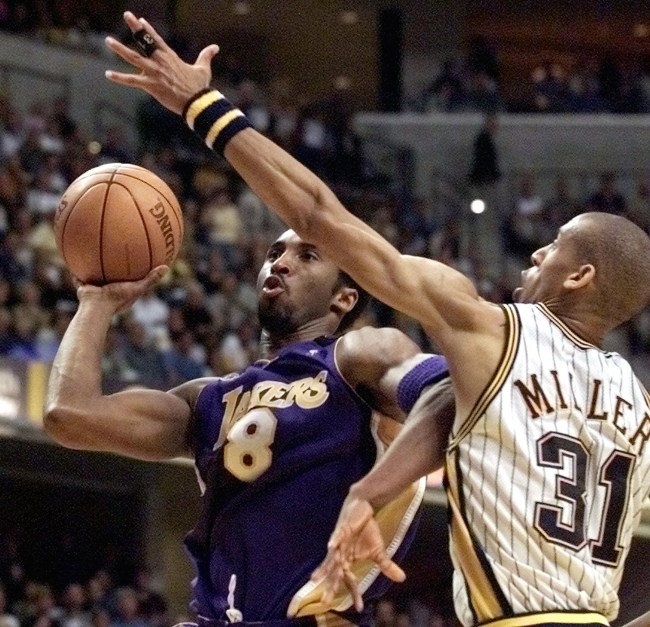 On Tuesday night’s Inside the NBA, Shaquille O’Neal, Charles Barkley, Dwyane Wade, Kenny Smith, and Ernie Johnson, were still reeling over the death of Kobe Bryant. The crew were talking about what Kobe Bryant meant to them, including Shaq’s tearful monologue, and sharing inside anecdotes about the late Los Angeles Lakers legend. Reggie Miller talked about Kobe’s first nickname, which thankfully did not catch on.

Around 1996, Miller was asked by his attorney, Arn Tellem, to talk to an up-and-coming basketball prospect by the name of Kobe Bryant. So Miller obliged and called up Kobe, who was 17-years-old at the time. Kobe was 17 when he was drafted by the Los Angeles Lakers in the 1996 NBA Draft.

“Kobe wanted to know what was all the intricate trash-talking and moves that were going on between MJ and I,” Miller said of his conversation with the young Kobe despite “not having a very strong relationship” with Jordan.

Miller asked himself, “And I’m thinking to myself, ‘what does this young 17-year-old, what does this kid want to know all about this MJ talk for?'”

Reggie told Kobe that “there’s only one Black Cat,” referring to Michael Jordan.

“I refused to call Michael, ‘Michael Jordan,’ so I called him the ‘Black Cat,'” Miller said.

Kobe was so quiet on the phone, and then Kobe finally broke his silence. “You know what, you’re gonna refer to me as the ‘Caramel Cat,'” Kobe, who isn’t even in the NBA yet, told Miller of how to address him, as if he was the next Michael Jordan.

“Fast forward two or three years later, we had no answers for that kid,” Miller said of Kobe.

Reggie Miller telling story how Kobe wanted to be referred to as the Caramel Cat pic.twitter.com/SRbiHEXmhs

RELATED: Dwyane Wade Gives Tearful Goodbye To Kobe Bryant: ‘Today Is One Of The Saddest Days In My Lifetime’

Reggie Miller first told the story of the Caramel Cat in December of 2017 on The Dan Patrick Show. In the interview, Reggie also said that he taught Kobe a stepback move when he first entered the league. Miller said that a few years later in “Game 3 of the NBA Finals after Shaq fouled out,” Kobe took over to lead the Lakers of Miller’s Pacers and helped seal the deal with a stepback jumper.

“You never should have shown my that stepback,” Kobe told Miller after sinking an unguardable stepback shot.

Reggie probably misspoke when he said Game 3 because Kobe didn’t play in Game 3 due to an ankle injury. He probably meant Game 4 because Shaq did foul out. The Los Angeles Lakers defeated the Indiana Pacers in overtime by the score of 120-118. The 22-year-old Kobe Bryant scored 28 points, added five rebounds and four assists.