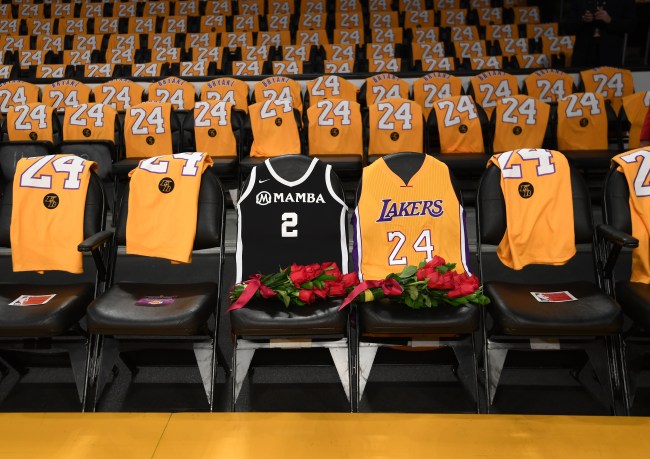 The Kobe Bryant memorial service was held today in Staples Center and, among the many things that those in attendance shared and experienced while mourning the tragic death of the Lakers legend, his 13-year-old daughter Gianna, and seven other passengers on a helicopter, were some rare items to remember him by. There were tons of stories and lots of emotions, but one of the items handed out to those in the arena was a special photo book that had various photos of Kobe with his daughter, among other things.

Attendees at today’s memorial for Kobe and Gianna will be receiving a special picture book. 💜💛

In a moment that’s supposed to be all about paying tribute to Bryant, unfortunately, some people are trying to profit off of his popularity. That’s because, with a simple search on Ebay, some of the items fans at the Kobe Bryant memorial service were given have already popped up on the auction site, with some looking for hundreds (and even thousands) for these rare collectibles. Take a look below at some of the things people are trying to earn money on.

Kinda sick to know people are out there selling Kobe merch from today's memorial on ebay already… and asking these kinds of prices! 😢 pic.twitter.com/ulXaOuQRO4

It’s pretty disgusting to think that people out there are trying to make money off being inside the Kobe Bryant memorial service, looking for a quick buck following the tragedy. Unfortunately, that’s the world we currently live in, and it’s not the first time some “fans” have tried to do something like this following the fatal helicopter crash. Remember, following the first Lakers game after Bryant’s death at Staples Center, there were other people charging hundreds for the shirts handed out to all attendees that night.

One would think people would act in kind and not do things like this, but, for some reason, everyone just can’t help themselves when it comes to making a quick and east buck. This is the reason why Nike had initially paused sales on all Kobe Bryant gear on its site following his abrupt death, because it didn’t want some sneakerheads loading up on merch and selling it for a higher price down the line. Too bad that’s not the case following the memorial today, because it’s pathetic by the people doing it.