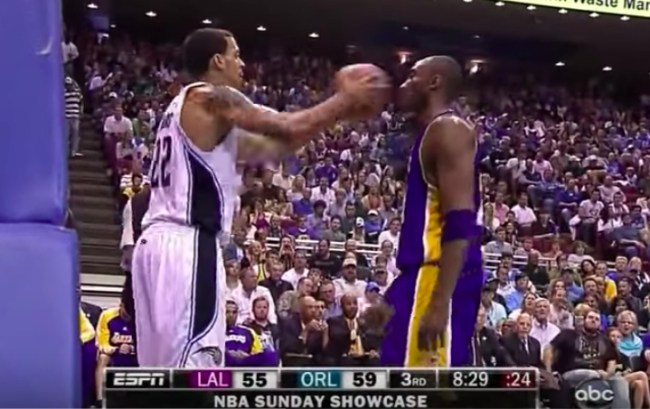 I’ve been working on the internet for too long to believe that there is any changing the mind of a Kobe Bryant fan. There is something uniquely cult-ish about Kobe lifers, so much so that they get insulted when arguably the most gifted athlete in the world signs on to revive their now hapless franchise. Debating them is as effective as paper towel seatbelt and even the mere mention of Kobe being anything less than a divine figure is blasphemous to the low-key most obnoxious fans out there.

So, this should really get their purple and gold panties in a bunch.

We all remember the Kobe Bryant/Matt Barnes clip that is constantly used to support Kobe’s tenacity and fearlessness and old school gritty mentality.

Kobe doesn’t even blink when Barnes motions to throw the ball in his face. I think I’ve seen this Kobe play as many times as I’ve seen his lob to Shaq in Game 7 of the 2000 Western Conference Finals. Admittedly, it’s impressive. I probably would have started crying.

Welp, there’s a new video that is buzzing around Twitter that reveals that the play may be, dare I say, fraudulent. The video shows Barnes standing not directly in front of Kobe, but off to the side, a nuance you cannot see from the world famous angle. Kobe detractors may point out the fact that Kobe didn’t flinch because he didn’t need to. He wasn’t front and center for the progression of the balk.

Everything we know about the Kobe flinch GIF is a lie 😱

He wasnt standing in front of him when he did it my whole life is a lie pic.twitter.com/8pGF2IRAjQ

As expected, Kobe disciple rushed to defend their lord and savior’s honor.

Kobe has killer instinct so he has never flinched

Go to the park and make someone who you're fighting the entire game against make that to you with the ball, in that distance. Good luck not flinching.

Even @Matt_Barnes22 said he was surprised how @kobebryant didn't flinch.

Others felt as though their worlds have been turned upside down.

What's next? Jordan was actually peeking when he hit that "eyes closed" free throw?

Where do you stand on #FLINCHGATE?