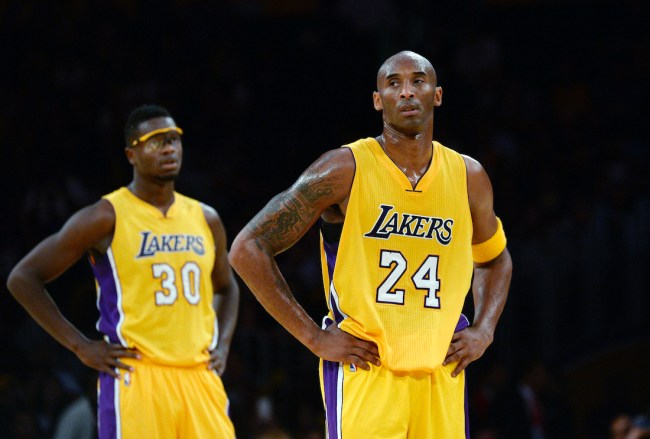 There are so many tremendous Kobe Bryant stories that it can be hard to keep track. Like the time the Lakers icon literally showed up to a team’s practice the day before the Trade Deadline to talk crap to his “bum” teammates who would be sent packing, or how he and Michael Jordan had a “virtual game of one-on-one” during a dinner once. I mean, those are just two of my favorites, but we all know there are so many that show just how lethal Bryant was when it came to basketball.

Bryant was just built differently, guys, and his legendary work ethic is what helped him reach heights that most NBA players can only dream of. But as incredible as Kobe Bryant was, like Jordan, he was a real SOB to some of his teammates at times — and a young Julius Randle once experienced the wrath of a demanding Black Mamba.

Appearing on The Old Man & The Three podcast, Randle — who’s playing at an All-Star level for the Knicks this season — the big man described the scene during Kobe’s final game with the Lakers in 2016. Bryant, who finished with 60 points on an incredible 50 shots, knew the game was all about him, and he didn’t care if his younger teammates didn’t get the ball for more than a few seconds.

That wasn’t part of Randle’s agenda, however, because he actually had the balls to tell Kobe Bryant during his final Lakers game that he wanted to shoot the ball. As you might imagine, Bryant wasn’t having any of it, as Randle describes below.

“He took the ball out,” Randle narrated. “He inbounded to me and I was like, ‘Yo I’m shooting this time.’ And he was like, ‘You want everybody in this arena to boo you? Go ahead. You better throw me the damn ball.’”

This is absolutely incredible stuff from Julius Randle, guys, and only grows the legend of Kobe Bryant even more. Like, who but the Mamba could make a teammate pretty much quiver in fear at the simple thought of taking a shot? Oh, right, there isn’t anybody else.

Sure, the bullying of teammates may have been a little unwarranted at times, but given the fact that this was Kobe’s final NBA game ever, everybody knew the contest was all about him. The fact that he shot the ball 50 times doesn’t matter, because, as everybody watched, they wanted to see how many points he could score.

Naturally, Bryant didn’t disappoint, and it remains one of his greatest moments while playing for the Lakers — which includes a long list of accomplishments.