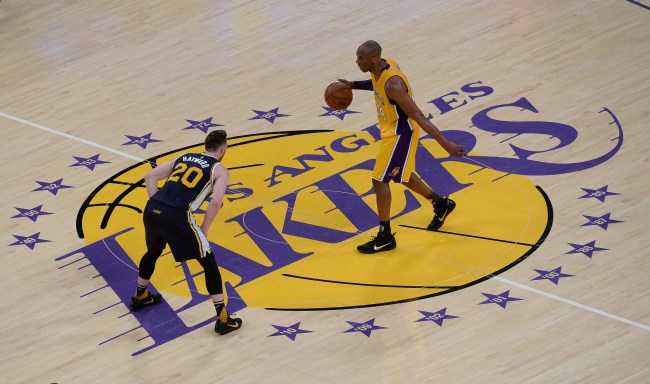 If there’s a tiny slither of good to come from this horrific tragedy, it’s all the tributes and stories that have been told that define one of the greatest sports icons in history.

-Lou Williams describing how Kobe disallowed Lakers players to wear his shoes because they were ‘soft.’
-Kobe’s one goal as a kid was to win 8 titles so that he would have more rings than his basketball idols Michael Jordan and Earvin Magic Johnson.
-The iconic photo of Kobe crying in the locker room shower after winning the 2001 NBA Finals was due to his parents not showing up to a single game even though three games were in his hometown of Philly. Kobe fell out with his parents in 2000 after meeting Vanessa Laine. Kobe’s dad Joe did not approve because was ‘uncomfortable that Vanessa, a Latina, is not African-American.’

The latest incredible Kobe story came from sportscaster Mike Tirico, who claimed that in Kobe’s last game of his career–a game in which he scored 60 points in a win over the Jazz–opposing guard Gordon Hayward committed an intentional lane violation on a Kobe free throw to ensure he would achieve 60 points on the night.

There’s a moment from Kobe’s final game that few people saw and nobody really remembers … but @miketirico won’t ever forget it. pic.twitter.com/prJGObG58y

It has also come to my attention that there is a story going around tonight about an intentional lane violation that I took to ensure Kobe would get his 60th point in his final game and many are applauding me for the gesture. The fact of the matter is that is not true.

He got 60 on me and I didn't give him anything free all night. What happened on the free throw line was not intentional. Kobe would have lost respect for me if I gave him something free. That’s what made him so very special!

Gordo, you gotta let this slide, bud. Never let the truth get in the way of a good story.