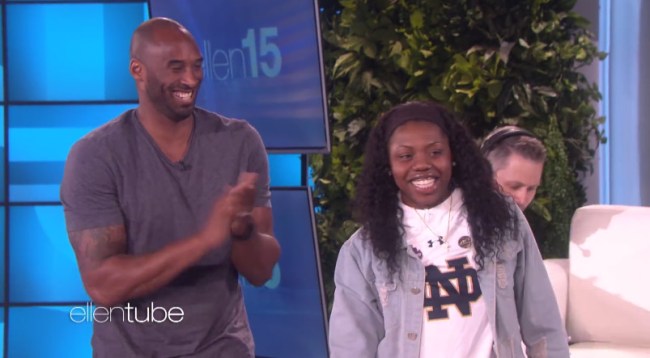 After hitting the first game-winner, Ogunbowale she shouted out Kobe Bryant as her inspiration, saying, “I know I just had to shoot it at the last minute. I mean, I didn’t want to give them a chance to get the ball. I went into Mamba Mentality. Kobe’s here, so that’s what I had to channel.”

Kobe, who was in attendance, got wind of Ogunbowale’s reference and praised the junior guard on Twitter.

As one would expect, Ogunbowale was blown away by Bryant shouting her out.

Bryant then told her to finish the job on Sunday.

Which she most definitely did.

So when Ogunbowale appeared on Ellen, Degeneres had an amazing surprise for her: The Mamba himself.

When they sat down after an awesome hug, Kobe called Ogunbowale a champ, to which Arike replied (pointing at Kobe), “That’s five rings. That’s a champ.”

Bryant wasn’t having it though, breaking down the fact that Ogunbowale had done something he never did.

“You gotta understand, that’s like a picture-perfect moment,” said Kobe. “As a kid you dream about ‘5,4,3,2,1’ to win a championship — and she actually did it.”

Kobe even brought her two signed jerseys, one for her and one for her dog, who is named… wait for it… Kobe.

Then the three of them played some really bad basketball with Ice Cube, and, of course, Ogunbowale once again hit the game-winner.