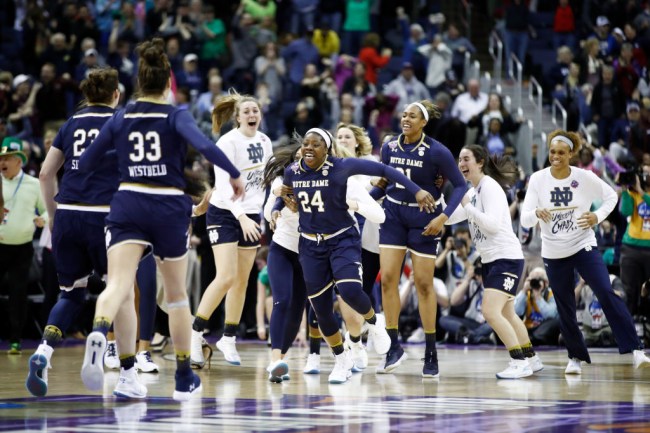 The Fighting Irish, who were down for most of the game, mounted an insane comeback in the fourth quarter which ended with this a amazing buzzer-beater shot by Arike Ogunbowale with .1 seconds left.

This is Ogunbowale’s second buzzer beating shot in less than a week and on Friday she wanted to let everyone know that she did it because she was inspired by Lakers legend Kobe Bryant and his Mamba Mentality.

“I know I just had to shoot it at the last minute. I mean, I didn’t want to give them a chance to get the ball,” she said. “I went into Mamba Mentality. Kobe’s here, so that’s what I had to channel.”

After today’s win, Arike once again gave Kobe another shout out after the game.

Arike Ogunbowale is as cool as ice after hitting game-winner to win National Championship…Shouts out Kobe again…..<3 pic.twitter.com/h8dXRcx7s7

Kobe Bryant was impressed by Arike’s game-winner and gave her props on Twitter after today’s national championship game.

Ogunbowale’s performance in this year’s women’s NCAA tournament is nothing short of legendary and will be remembered with all the iconic March Madness moments in the history of college basketball.