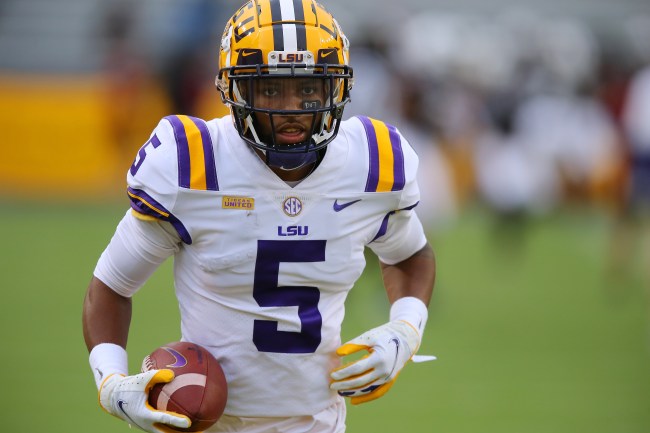 LSU Tigers wide receiver Koy Moore claims police violated him during an incident this past Saturday that only ended when the freshman told cops he was a football player.

According to Moore’s Twitter account, he was approached by police officers who believed he had drugs or weapons on him, with the the college football player even alleging cops unzipped his pants to try and find a weapon. When Moore tried to go live with his phone, he said officers snatched his phone. Take a look below at Koy Moore’s allegations.

Just read this please we need a change!!! pic.twitter.com/EyiK0Rmx1r

The LSU Tigers were on a bye this past weekend, but Koy Moore didn’t give details about when the incident happened other than saying it was Saturday night. After word came out about the player feeling violated and threatened, Moore’s head coach, Ed Orgeron, issued a statement.

Following Moore’s allegations, Baton Rouge Police Chief Murphy Paul said the department is working to gather more details, but, currently, three officers who were involved were placed on leave as an investigation into the matters continues. Here was Paul’s statement, via FOX News:

“We appreciate Mr. Moore bringing this incident to our attention,” he said in a statement released Monday. “As in every case, we will be collecting all available evidence and conducting interviews. Accountability and transparency are critical in building trust with the community. I pledge a thorough investigation into this complaint.”

A true freshman, Koy Moore has pulled in eight catches for 70 yards thus far this college football season. We’ll have to wait and see what ends up coming from his alleged incident with officers over the weekend. If the cops involved did, in fact, do what the player says, here’s to hoping the department disciplines them to further prevent things like this from happening in the future.