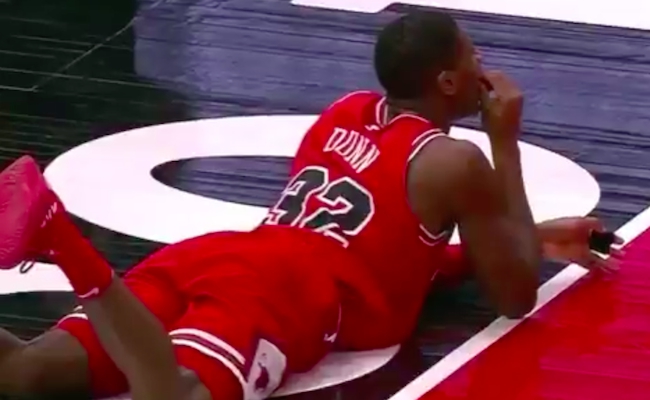 During last night’s game against the Golden State Warriors, Chicago Bulls guard Kris Dunn had a clutch steal in the fourth quarter with his squad facing a seven-point deficit with under three minutes left to play. The good news? He managed to cut that lead to five with a dunk at the other end of the court? The bad news? Instead of landing on his feet— as most NBA players would do after such a play— he fell headfirst to the floor with his face taking the entire brunt of the fall.

If you don’t like seeing people with bloody lips and busted teeth, I would suggest you don’t click play.

Brutal scene in Chicago. It looks like Kris Dunn broke a bunch of teeth falling face first to the floor pic.twitter.com/1IgeEdBH2B

After he was examined by team doctors, the Bulls released the following statement outlining the extent of his injuries:

“Chicago Bulls guard Kris Dunn chipped and dislocated two front teeth when he fell with 2:52 left in the fourth quarter in tonight’s game against the Golden State Warriors. He was also evaluated for potential concussion and at this time is clear of concussion symptoms. He will be re-evaluated tomorrow at which time we will provide an update.”

They didn’t mention anything about a bruised ego, but I guess that can be implied.

He might have been (subjectively) OK, but one participant in the play didn’t fare so well: the court. After the game, we were provided with a closer look at the floor, and it seems like the hardwood might have actually taken the brunt of the fall.

Thoughts and prayers to the court at the United Center.