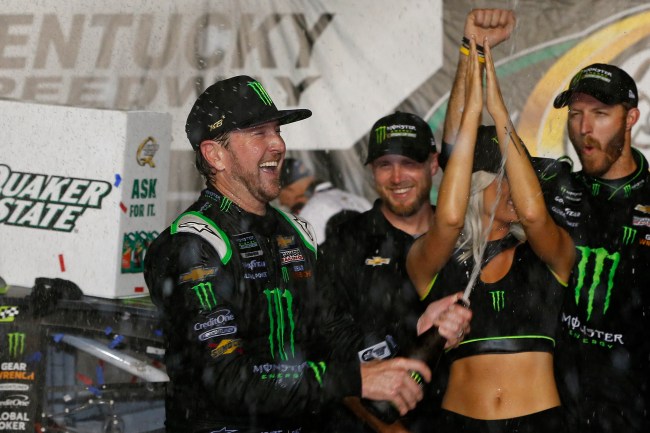 Kurt Busch just told us what happens when you die (if you said your prayers and didn’t have sex before marriage, of course).

On our Endless Hustle podcast, the NASCAR star recalled a historic night of partying in 2016 that included everything a red-blooded American man could want in an afterlife:

Kurt, a massive Chicago Cubs fan, speaks of November 2, 2016 with the same enthusiasm he speaks about winning the Daytona 500. And it’s shocking he even remembers it.

Busch recalls how he flew up for Game 7 of the World Series with Danica Patrick and sat eight rows behind home plate.

As luck would have it, the dude sitting next to him invited him to Murphy’s after the game, the bleacher bar which would surely have a line around the block, win or lose. Murphy’s let Busch and his new friend cut the entire line and go through a side entrance into the most poppin’ bar in the country at that moment.

“It gets to about 2 am, we’re all still partying. And they start flushing the place out.

And they shove us in the kitchen, our little group. There’s probably about 20 of us.

Dude I kid you not, they pull us out to this other area and this garage door rolls up. I swear this drum set was sitting there with the lights beaming down on it, and before I knew it with the next beer I had, Eddie Vedder is in there sining ‘Go Cubs Go’ and somebody jumps on the drums and there’s this small impromptu Pearl Jam concert.

After that moment happened, Bill Murray rolls in. And Bill is thrashed. Joe Buck from the Fox broadcast comes in. Theo Epstein, the Cubs’ President.

And everyone’s telling stories like their 12-year-old’s playing Little League baseball. It was the coolest thing.

If this isn’t heaven, I’ll take my chances on hell.

Listen to the entire Kurt Busch interview by smashing the play button below (interview starts at the 3:30 mark). We talk to Kurt about his unlikely friendship with Howard Stern’s infamous limo driver, his interactions with Prince Harry, living next to Michael Jordan, and more.