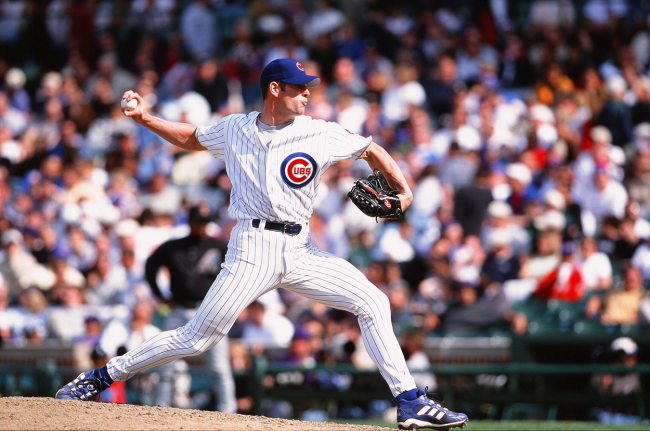 Kyle Farnsworth played for nine different teams over the course of his 15-year Major League Baseball career. The 46-year-old retired from baseball in 2014 and has since lived two very different, but similar, lives.

Shortly after hanging up his glove, Farnsworth began his career as a semipro football player. He played a few years with the Orlando Phantoms of the Florida Football Alliance and was an absolute monster. His highlight tape was ridiculous and he was a quarterback’s worst nightmare.

Farnsworth is absolutely jacked and looks nearly unrecognizable. He is massive and his muscles have muscles.

According to Sports Illustrated, Farnsworth estimated that his total body fat was around 7% on the day of the competition. He said that was about twice as high as his body fat when he was playing baseball, but he was up more than 15 pounds of muscle.

Kyle Farnsworth revealed his secret to getting absolutely shredded.

In the Sports Illustrated article, Farnsworth shared what it took to get his figure to competition level.

“He credits his figure to two or so hours per day of lifting, five days a week, and a strict diet. Two years ago, on his 44th birthday, he squatted 225 pounds 44 times. His personal record for one repetition is 545 pounds.”

With the strict diet, the biggest thing that Farnsworth had to cut was Oreos. He also had to increase his cardio.

“He’s a big guy,” said his trainer Ivan Torres to Sports Illustrated. “He just needed to follow a diet and intensify his cardio, and eventually his body got shredded.”

After sweeping his first-ever competition, Farnsworth is already considering retirement from body-building.

“I doubt I’ll do another one,” he said to Sports Illustrated. “I want to stay batting 1.000. Three-for-three’s good enough.”

Also factoring into the decision is his diet. He cut carbs from his diet 10 days before the competition and said that it took a toll on his mood.

“You can get very grumpy for no reason,” he said.

In addition, Farnsworth wants his Double Stuffed Oreos. As for what is next, he isn’t sure, but returning to football is definitely on the table.