Kyle Kuzma Challenges For Worst Pregame Fit In The NBA 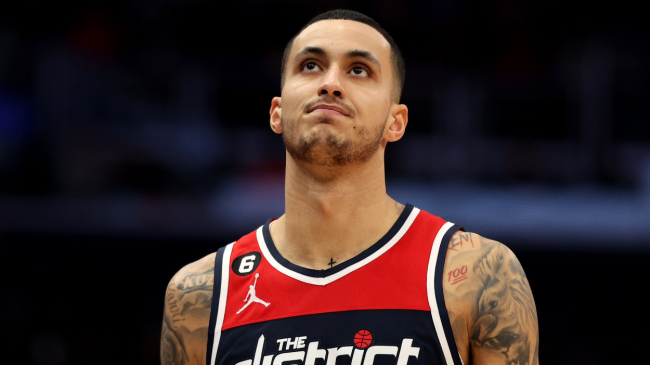 Kyle Kuzma made a statement with his pregame outfit on Tuesday. What statement that was, we’re not quite sure.

The NBA star has now gone viral for his getup with many calling it the worst wardrobe choice in the NBA this season.

The Wizards play the Mavericks tonight as they look to work their way back to .500. At 20-26, Washington sits on the outside looking in in terms of the current playoff picture.

Kuzma will surely be a key contributor for the Wizards in their upcoming matchup with Dallas. He’s averaging career highs with 21.8 points and 4.0 assists a night while adding 7.6 rebounds.

But while he’s shined on the court this year, the forward is maybe more well-known for making headlines off the of it. He’s often seen sporting interesting looks ahead of his contests, most notably his famous pink sweater which the Wizards recently immortalized by turning it into a bobblehead.

Tuesday, though, he might’ve missed the mark.

Kuzma is rocking a rainbow striped, knitted sweater with no undershirt and a matching face-covering ski mask.

Fans on social media quickly responded to the getup. Check out their reactions online.

One fan posted a GIF with the message, “He’ll do anything for clout.”

Another person said, “If this dude focused as much on his game as his outfits, he’d be a very solid basketball player.”

The reaction didn’t stop there. Some compared him to a character from Fat Albert while others said he looked like an airhead.

This fan might have a solution. He writes, “If we ignored him, imagine how silly he’d feel.”

I’m not sure that would stop Kyle Kuzma.

We’ll see if he makes as much noise on the court as he has off it Tuesday night. Washington needs a win if they want to get back in the playoff race.

READ NEXT: Stefon Diggs trolled for outfit ahead of Bills playoff game