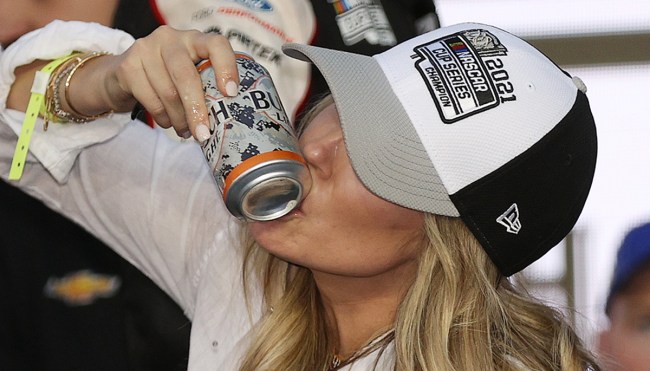 Kyle Larson is one of the many NASCAR drivers who spent years honing his skills on smaller circuits before securing his spot in the big leagues, and his personal journey to the top of the world of auto racing included a full-time stint as a dirt track driver who went as hard off the course as he did while he was on it.

Earlier this year, Larson shared his recollection of the night he met his now-wife Katelyn during that time in his life—a tale you have to imagine he pieced together in hindsight when you consider it involves her drawing on him with a Sharpie after he passed out following an ill-fated attempt to impress her with his overestimated drinking abilities.

That, my friends, is what a match made in heaven truly looks like.

Over the years, Katelyn Larson has repeatedly showcased that she’s no slouch when it comes to deleting beers, as her celebration of choice following one of her husband’s victories is shotgunning a can of Busch with ease.

On Sunday, Kyle Larson added “NASCAR Cup Series Champion” to his impressive list of achievements by outlasting the rest of the field at Phoenix Raceway in the final race of the 2021 season. As a result, Katelyn had yet another reason to celebrate and took full advantage, as she popped open a Busch Light on Victory Lane and chugged it like an absolute champ.