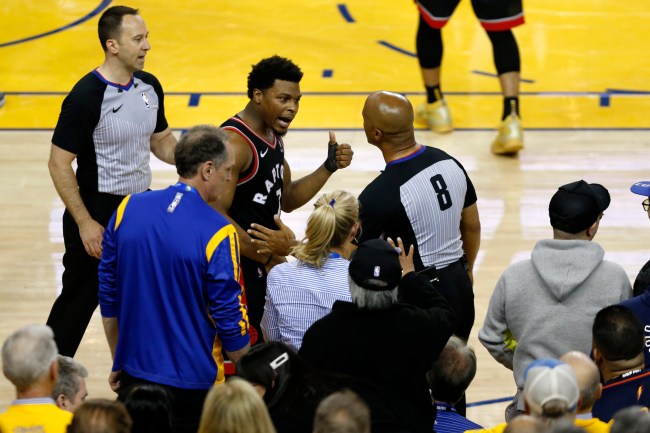 Everyone seems to be talking about the Kyle Lowry incident from Game 3 of the NBA Finals, where a fan sitting in the front row pushed him and allegedly used vulgar language at him as the Toronto Raptors star crashed into the stands. While we found out that the culprit was a actually a billionaire investor in the Golden State Warriors named Mark Stevens, we also now know the punishment that the NBA is handing down against the guy — and it’s a harsh one.

According to SportsCenter’s Twitter account, the NBA banned Mark Stevens $500,000 and banned him for a year for the incident with Kyle Lowry last night. That may seem pretty steep considering it all happened in a matter of seconds, but, whether he’s an investor in a pro sports team or not, Stevens should know better than to get into it with a player during a game.

Golden State and the NBA announced that Warriors investor Mark Stevens has been banned for a year and fined $500,000 for pushing and directing obscene language at Kyle Lowry in Game 3. pic.twitter.com/tAGDN5yire

Prior to the punishment from the league, for their part, the Warriors did try to play damage control, releasing a statement apologizing to Kyle Lowry and saying that they’d look into details further. Here’s what that statement read.

With other NBA players like LeBron James voicing their opinions about the whole thing, it’s clear that Stevens had what ultimately came to him, with everyone taking the side of Kyle Lowry on this one; rightfully so. Even Lowry himself was pushing for a hard ban and/or fine against Stevens, going as far as saying he hoped the league banned him “from all NBA games ever” while on SportsCenter with Scott Van Pelt last night following the NBA Finals game.

"He reached over & put his hands on me for no reason then he said a couple vulgar words to me & repeated them…hopefully they ban him from all NBA games ever."

Even Stephen Curry praised Kyle Lowry for handling the situation as composed as he did, offering up his thoughts on the entire incident today while the league reviewed details as they prepared to hand down a punishment to Mark Stevens.

Steph Curry gives credit to Kyle Lowry for handling the situation with Mark Stevens the way that he did. pic.twitter.com/c5vThmSNvH

There’s no place in sports for this type of stuff. And, while some fans can say Kyle Lowry and other people are overreacting because the shove wasn’t violent or didn’t result in anything bigger, those are the same people who would get banned for crossing the line when talking crap to an opposing team’s player. So good on the NBA do act swiftly and get the punishment right here.