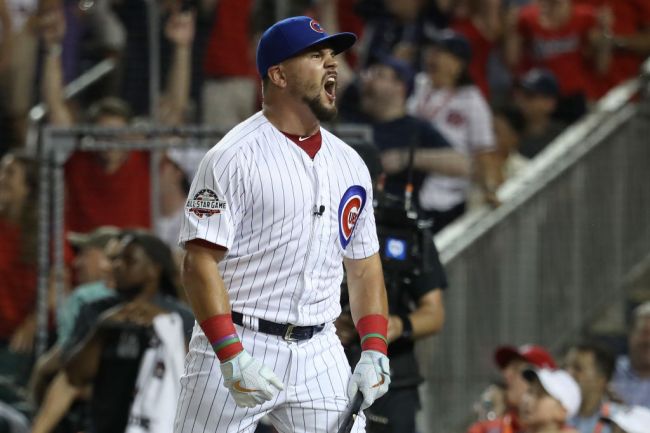 Schwarber wasn’t concerned when pitching coach Tommy Hottovy was quarantined for 30 days and coach Mike Napoli missed all of July because of a positive test.

Those moments didn’t count, or weren’t real, because those are just baseball players and don’t live in the White House.

Now that President Donald Trump and First Lady have both tested positive, Schwarber’s fear of the virus has increased, according to the Chicago Tribune.

Yes. Trump is obviously the “most safe.” (I think you mean “safest”, Schwarb.)

The man who refuses to wear a mask, still shakes hands, and still swore the virus would just go away one day – even after a million briefings told him otherwise – people would think THAT GUY would be safe.

When asked about safety protocols, Schwarber is leaning towards “safety.”

Ross put his trust in MLB’s plans to allow a limited number of fans to attend the League Championship Series and World Series in Houston and Arlington, Texas.

“We definitely miss the fans,” Ross said. “Major League Baseball has gone above and beyond almost extremes to keeping everyone safe and making sure that everybody is following protocol.

“The list of things that we have to go through, it’s pretty long and invasive, so I have a lot of confidence that if they let fans back they’re going do it with a lot of safety precautions in place.”

Schwarber was more measured in his comments.

“It’s up to them,” Schwarber said. “I’m not a politician or a person who wants to make those kinds of decisions. If it was me, I’d lean more toward safety than anything else. I’m glad I don’t make those calls.”

I’m going to give Schwarber the benefit of the doubt and assume he meant to say that now that the President and First Lady have contracted the virus, no one should consider themselves safe or immune to catching the virus.

The important takeaway from the President and First Lady contracting the virus is that THE VIRUS DON’T GIVE A SHIT WHO YOU ARE OR YOUR JOB.

Schwarber’s take is the dumbest athlete opinion of the day by a longshot as that honor goes to Reggie Bush who thinks Trump is faking.